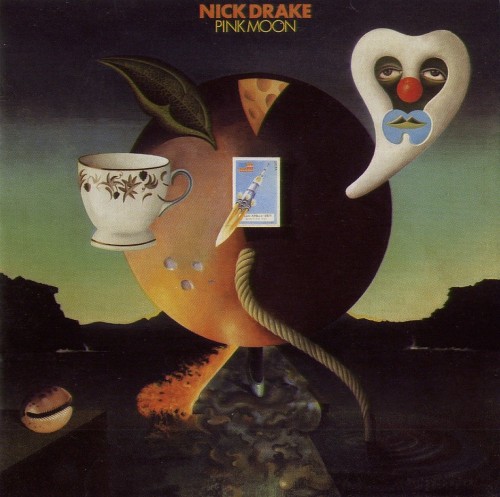 At this point, is there anything about Pink Moon that isn’t legendary? Age of artist: 23. Recorded in two nights. Voice and acoustic guitar, plus one small splash of piano. Not even a half hour long. Dropped off at the label’s office with barely a word. Sank like a proverbial stone upon release. Two years later, it was the artist’s turn. Then the pilgrimages to his home began, from listeners all over the world who’d connected with his songs. And then, two decades later, a show of hands in an ad agency office. All in favor of using the Church’s “Under the Milky Way” to score this car commercial? All in favor of Nick Drake’s “Pink Moon”? In the end, Nick Drake won (read more about the making of VW’s Cabrio ad from adman Shane Hutton in the comment section here), and in the very end, his work finally introduced to millions, he won again.

Both “Pink Moon” and Pink Moon are now seen as beacons for young musicians, guiding lights to help them on their path. Ironic, really, as the album came up through the valley of the shadow of death, and it bears not the scars of depression, but the very skin. Yet its starkness proves its saving grace – with nothing to weigh heavy on the songs, nothing can be used to drag them down. Pink Moon is like a black swan feather floating on a midnight brook, all dark but somehow still light.

When researching a project like this, it becomes clear that all those artists who have paid tribute to Nick Drake by covering his music have invested themselves in the work, body and soul. No matter how different the style of music, it carries a different kind of intensity than covers of most artists; with Drake, there seems to be a special need to repay the original artist in kind for what he’s given. This is a collection of eleven covers of the songs on the Pink Moon album, and the eleven artists herein can be said to have paid their debts in full.

Besides the lyrics, nothing about Drake’s rendition of “Pink Moon” feels like it has something to do with death. Not his voice, a cool cross between croon and purr; not the pretty little piano lick; not the guitar, slaloming along with all the assurance of a professional skateboarder. Black Mesa’s cover, though – that’s got the spectre of doom in its bones, and it lopes in a deep crouch. It’s from their 1996 release, titled (appropriately enough) Eerie.

Stephane TV come from Italy, where they make songs that “combine the immediacy of melodic rock with the instrumental themes of post-rock, our moods with social considerations and flashes of poetic cinematography.” (So sayeth their Bandcamp page.) They come at “Place to Be” from more angles than Drake, with restless snapping drums and guitars that won’t be cornered. The song not only survives, it thrives.

Emery’s Misery is a New Hampshire-based trio who got their name from a mountain in Maine, which was named after an unlucky lumberjack who had more setbacks with getting lumber than Laurel and Hardy with a piano. Anyway, the band has a sort of Petty-goes-prog sound, and they ease on down “Road” at a steady trot.

Jugendstil – Which Will (Nick Drake cover)

Lucinda Williams’ cover of “Which Will” is the usual go-to when lists of the best Nick Drake covers are being composed, and with good reason. But check out what the German electronica duo Jugendstil do with their cover; only the words are preserved, and are now set to a burbling house track. Play these two back to back and tell me now – which will you love the best?

“Horn” is the briefest song on Pink Moon, not even making it to ninety seconds, and it’s the album’s only instrumental. Tom Hughes, musician-educator-tunesmith from Herefordshire in the UK, uses it as a jumping-off point, and he and his piano go nearly four times longer, duplicating and then elaborating.

French sextet electro-jazzers Post Image invited John Greaves to join them on vocals for their 2012 album In an English Garden. The end result featured a cover of “Things Behind the Sun” that sounded like Scott Walker turned loose in a spaceteria on 52nd Street.

“Know” is one of the most memorable Nick Drake songs for its simplicity. Four lines of he-said-she-said, using the know/no homonym to make it a little more cleverly complex, and one simple guitar figure repeated over and over. Well, what if that guitar figure was wiped out and a Moog synthesizer blooped down to take its place? Olele Brut wondered that very same thing; this is their answer.

Giulio Casale is an Italian musician/actor. It’s just him and his guitar, live on stage, performing “Parasite” on the tribute album Way to Blue Sognando Nick Drake. “An astoundingly specific cry of self-loathing and alienation,” Mojo called the original; indeed, Casale performs it as a howl into the empty night, and hearing the audience applaud at the end is especially jarring.

Tir Na Nog have a significant spot in Nick Drake history – they’re one of only two artists to have covered and released a song of his during his lifetime (the other: “Mayfair” by Jamaican singer Millie). The Irish band, former labelmates of Drake’s, didn’t have much success with their third album, 1973’s Strong in the Sun, but don’t blame the music, especially not the upbeat cover of “Free Ride” that started the record with a bang.

The Panoply Academy was an Indiana-based math rock band that went through multiple lineup changes (and multiple names) over its existence. Their cover of “Harvest Breed,” scooped up in the odds ‘n’ sods collection Everything Here Was Built to Break, sounds like Wire having a bad dream, and conveys an even more appropriately unsettling feeling than Drake’s original.

The final song on Pink Moon, “From the Morning,” was a much-needed balm for the rest of the record, a sunrise after a long night of deep melancholy. Naomi Berrill, born in Ireland, playing cello and singing in Italy, opened her debut record From the Ground with a cover of “From the Morning” that couldn’t have been more perfectly placed; where Drake saw an ending, she found a beginning, and a beautiful way to close the circle.

Nick Drake’s Pink Moon is available on iTunes and Amazon. Brytermusic.com takes care of his estate.