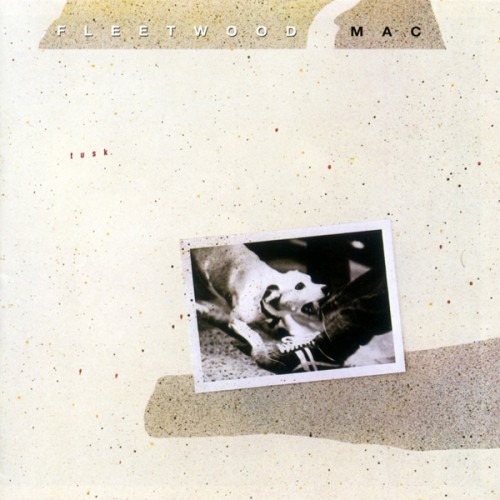 Tusk‘s reputation as an infamous failure is pretty much cemented at this point. But it didn’t actually fail at all.

Commercially, it wasn’t a failure. True, the label spent a then-record $1.4 million on Fleetwood Mac’s Rumours follow-up. True, none of the singles matched the success of “Dreams” or “Don’t Stop.” And true, in the end Tusk sold well under Rumours‘ 15 million copies. But the four million it did sell more than made back that extravagant advance and, then as now, any double album that actually made a label money would be in the minority. If it didn’t live up to Rumours’ insane success, well, no album was going to. The worst that can be said is that Tusk underperformed more than a more accessible follow-up might have underperformed. But they weren’t going to manage Rumours II even if they’d wanted to (they arguably tried with Mirage a few years later).

Critically, it wasn’t a failure either. Robert Christgau gave the album a B+ in Village Voice, saying, “A million bucks is what I call obsessive production, but for once it means something.” The New York Times praised it, though called it a little overstuffed. And though unrated, Rolling Stone‘s review of Tusk reads about as positive as their Rumours review two years earlier. Writers were throwing around words like “brilliant,” “uncompromising,” and even “punk” (comparatively speaking). The most negative the reviews really got was “weird” or “eccentric.”

Over the years, that weird eccentricity has made Tusk arguably the “coolest” Fleetwood Mac record, particularly among musicians. Indie stars like Animal Collective and the New Pornographers have spoken at length about their obsessions with the album. Covers have followed – with so many different types of songs to choose from, how could they not? Punky bands have “What Makes You Think You’re the One.” Poppy ones have “Think About Me.” Touring groups have long known the title track is a crowd pleaser, and really fun to play. And despite the album’s reputation for frenetic energy, anyone wanting a slow song has quite a few to pick from: “Storms,” “Walk a Thin Line,” “Save Me A Place,” etc. Sure, a few tracks don’t seem to bring musicians running, but for every song we were able to find at least one good cover (in the case of “Beautiful Child,” a downright revelatory one).

So whether you’re a staunch Tusk defender or have been put off by its reputation as a failure, rethink Fleetwood Mac’s most controversial LP with our favorite covers of all 20 songs.

The Flowers of Hell – Over and Over

Tusk is considered Lindsey Buckingham’s baby for good reason. His obsessive work on the album earned him his first producer credit (well, a “special thanks from the band,” anyway), as he spearheaded the sprawling change in sound over the rest of the band’s objections (and, when it underperformed, was banned from such experimentation again). This band photo in the liner notes makes pretty clear who’s in charge. That said, though Buckingham wrote nine of the songs here, Stevie Nicks wrote five (which, time-wise, took up more space on the album than Buckingham’s nine), and Christine McVie six, including the first one. The Flowers from Hell, who had a big fan in Lou Reed, deliver a swirling, meditative take on the opening track with their 16-piece orchestra.

“The Ledge” was never a single, but perhaps it should have been. Read enough about Tusk and you find a lot of people naming this their favorite track. When bluegrass group Nickel Creek reunited last year, it soon became a staple of their live shows. The energetic melody lends itself well to fiddle, mandolin, and guitar. This performance comes from the band’s 2014 Newport Folk Festival performance, the entire of which you can hear at NPR.

The Decemberists – Think About Me

Another McVie song, “Think About Me” gets a relatively faithful reading by the Decemberists, including a rare lead vocal from keyboardist Jenny Conlee.

White Arrows – Save Me a Place

It was a close call on which cover to pick between White Arrows and the crunchy Velvet Crush version we posted a few years back. In the end, White Arrows’s electronic dance number wins out as evidence that even the album’s spacier tracks can be turned into catchy pop songs without much effort.

The first Nicks track on the album, “Sara” has inspired years of rumors (heh) about the song’s subject. It was supposedly the intended name of a baby that she decided to abort. But it was also the name of the new squeeze (later wife) of Mick Fleetwood, who Nicks was still seeing on and off around Tusk. Nicks addressed the stories in Billboard last year, confirming…both? At any rate, Ballet School’s ethereal cover is so beautiful it makes you forget the gossip.

Fanfarlo – What Makes You Think You’re the One

The original version of this song seems to be at least 50% drum whacks, mixed very high, but Fanfarlo go mostly drumless on this acoustic cover (there may be a bongo or something). They build their soaring cover with insistent piano and delicate horns that sneak in like the National’s “Fake Empire.”

Best Coast‘s Bethany Cosentino is a bonafide Mac superfan. She wears their t-shirts for photoshoots, tweets about them regularly, and talks about her Stevie Nicks obsession in interviews. She’s covered them twice now, with “Rhiannon” on a tribute album and with this performance on Late Night with Jimmy Fallon that was repurposed for a b-side. The quiet distortion surging underneath the acoustic guitar appropriately evokes the song’s subject.

Idiot Glee – That’s All For Everyone

Four years ago, Idiot Glee aka Kentucky’s James Freeley was one of our favorite finds at SXSW. We wrote that “his spacey symphonies…transport you to some far-off dreamworld,” which is a pretty good description of this cover, too. The backwards scifi video is also worth watching, like a brief moment from a movie we’d want to see more of.

It make take a few minutes for you to even believe this lengthy post-rock jam is indeed a Fleetwood Mac cover. On an entire EP of Tusk covers, Heartichoke make “Not That Funny” an unexpected centerpiece, roaring through 10 minutes of drones and distortion. If Best Coast’s cover was a quiet storm, this is the equivalent of that Robert Redford movie where his boat gets hurled about in 50-foot waves and all he can do is strap himself down – only, in this case, all is not lost.

Le Blonde – Sisters of the Moon

Perhaps the strongest bit of evidence that Tusk isn’t entirely Buckingham’s show, “Sisters of the Moon” finds Stevie Nicks at her Stevie Nicksiest, writing about witches and spiders and black velvet robes. The production on the album does this song no favors, though, with Buckingham using his punk-inspired sparseness on a track that deserves a lusher treatment. Which it gets in Le Blonde’s pounding electronic cover, bringing out the dance club smash it was always meant to be.

Actually the second Mac song with this title (the first having been released five years earlier before Buckingham and Nicks joined), “Angel” was another of Nicks’s. I say “was” because Marianne Faithful’s performance was so definitive, it’s hers now. It comes from a mostly-indie tribute album from a few years back that was heavy on the Tusk material. Other worthwhile cuts: Bonnie “Prince” Billy’s “Storms,” Craig Wedren and St. Vincent’s “Sisters of the Moon,” and Tame Impala’s “That’s All For Everyone.”

In 2002, Camper Van Beethoven tested the waters on a band reunion by seeing if they could stand being around each other in the studio long enough to cover the entirety of Tusk (they later invented an elaborate fiction that this recording was some long-lost chestnut from the band’s early days). Buckingham is a fan: “I loved it. They took some of the songs to such different places. I thought, ‘Wow, where did they come up with that?’ Just the fact that a group of guys would sit around and want to remake a whole album like that. That was just a trip, I have to say. I loved it.”

Even Tusk diehards would probably admit McVie’s “Brown Eyes” is pretty slight. Just a few lines stretched out to four minutes, the song hasn’t earned itself many covers. This one is interesting though, making it a tango number by pairing it with Ástor Piazzolla’s standard “Libertango.”

I hate to knock McVie so much since she’s so newly back with the band – and has written so many great songs – but this isn’t one of her finest moments, either. Hushed folk trio Birdsong at Morning make it a quiet promise, though. It’s a much more logical song choice than their bold reinterpretation of King Crimson’s proggy “Matte Kudasai,” which is also worth a listen.

Mossyrock – I Know I’m Not Wrong

Like the Corrs with a side of power-pop, Mossyrock’s “I Know I’m Not Wrong” is raw but features some really nice vocal harmonies. That said, I do kind of miss the flatulent synth tone on the original.

Garrett Klahn is doing God’s work by covering what is, in my opinion, the album’s most eminently forgettable song.

Perhaps the most divisive song on this most divisive album, “Beautiful Child” has been praised as tender by some and derided as treacle by others (both members of Wolf Parade interviewed for the 33 1/3 book on Tusk named this their least favorite track). Haters may want to rethink after hearing this utterly revelatory cover by Bill Callahan, back when he was still going as Smog. Performed at a BBC John Peel session in 2002, “Beautiful Child” becomes an entirely different beast in a cover that builds slowly over the coarse of seven minutes anchored by Callahan’s mesmerizing baritone.

Atlas Sound is the quasi-solo project of Deerhunter’s Bradford Cox, and he shows how well he sounds without the support of his main band’s loud distortion on this quiet acoustic cover of “Walk a Thin Line.” Also his falsetto can totally match Buckingham’s.

Though this is one of the album’s most-covered songs, we have yet to hear a definitive version. Many bands play it live for fun, but rarely mess with the formula too much. Where’s the punk-bluegrass version, or the slow ambient take? Until then, we’ll have to setting for a young-ish R.E.M. goofing around on this truncated version at a KCRW session in 1991.

Jake and the Brians – Never Forget

An appropriately epic way to wrap up here, Jake and the Brians’ “Never Forget” cover blends soulful singing with big ’80s atmospherics in the vein of Twin Shadow or Purity Ring. It starts at 8 and is basically all crescendo from there. Fleetwood Mac has written many anthems, but they’ve never been this fist-pumping.

Fleetwood Mac’s Tusk is available on iTunes and Amazon. And as mentioned, the 33 1/3 book on the album is worth a read, too.