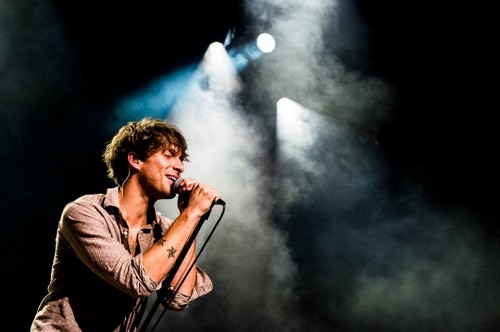 And then, the man proceeded to take us to church.

The Scotsman with an Italian name, Nutini started off as a sweet-faced, blue-eyed soul singer and has since evolved into a slinky hipped frontman with a smoldering sex appeal to rival a young Rod Stewart.

Born in Paisley, Scotland to an Italian father and a Scottish mother, Paolo Giovanni Nutini’s destiny was to take over his father’s fish and chip shop and spend his days slinging cod. His grandfather intervened, encouraging the boy to pursue his fortune in music, and at the age of 16 Nutini left school to work assorted odd jobs in the music industry, ranging from sound engineer to roadie. Before his 18th birthday, Nutini had a regular gig in London and was playing support slots for legends like the Rolling Stones and Amy Winehouse.

His career skyrocketed with the release of his debut album a couple of months after his 18th birthday. These Streets is a showcase of up-tempo pop, slow-simmering soul and (barely) post-adolescent heartbreak, tempered with a clearly discernible Scottish brogue.

“He’s a wonderful singer and he has a true feeling about his music…. Time will tell, but I’m as sure about Paolo as I’ve ever been about any artist I’ve ever had,” said Ahmet Ertegun, founder and president of Atlantic Records. Coming from the man who introduced the world to the Drifters and Ray Charles, this is high and effusive praise.

Nutini’s success continued as he broke into the American music scene. His hit single “Last Request” was featured on the sitcom Scrubs and teen drama One Tree Hill, and his sophomore album Sunny Side Up became the first UK number one album of 2010.

His newest release, Caustic Love, was described by The Independent as “maybe the best UK R&B since the 1970s blue-eyed-soul heyday of Rod Stewart and Joe Cocker.” Featuring samples from Gladys Knight and The Pips and Bettye LaVette and filled cocksure swagger, honey-sweet cooing choruses and low-down dirty funk, Caustic Love is anything but abrasive.

Three albums, a fistful of hit singles, thousands of live performances and a legion of fans around the world, Paolo Nutini is a bonafide global superstar. Not bad for a guy that started off as “the kid down the chip shop.”

“I’ve never seen what I’ve been doing as like a conscious homage to anything, really,” Nutini once said. “It’s just what I grew up listening to.” Maybe so, but on those occasions when he has made conscious homages – that is to say, the times he’s covered the work of earlier artists – his takes on their songs are as hot as that blazing Lone Star sun.

Paolo Nutini – Don’t Let Me Down (The Beatles cover)

Nutini’s soul influences are front and center in this Lennon-McCartney classic. Sweet and smoky like a barrel of bourbon set ablaze, Nutini takes it slow as he plaintively begs not to be let down. Then he digs his heels in, and the rasp comes out in full force. Oh, she really done him. She really done him good and left his soul-shouter with nothing more than a wounded heart and a voice that sounds like whiskey numbing the pain.

Paolo Nutini – Down In Mexico (The Coasters cover)

Nutini’s cover of “Down in Mexico” should come with a warning – “Might cause listener to tear off clothing.” The fact that this cover wasn’t prominently featured in a Robert Rodriguez movie has to violate the Patriot Act (nobody read that thing – it’s gotta be in there). Slick and dirty with licks hotter than chili sauce, Nutini’s version of this classic will have you shaking your hips, shimmying your shoulders and reaching for the tequila.

Starting his career opening for the late, great chanteuse, Nutini had plenty of time to hone his skills on this cover of Winehouse’s hit. A man who’s been smoking pot every day since he was 16, Nutini knows a little something about illicit substances and although he falls just short of hitting Amy’s winking cheekiness in “Rehab,” it’s a helluva cover that would have made the late diva damn proud.

Paolo Nutini, The Kooks, Wolfmother and Mumford & Sons – The Weight (The Band cover)

“The Weight” has become a festival mainstay and a chance for various musicians to get together and jam to their heart’s content. Elton John, Zac Brown and Mavis Staples performed a version of the song during the 55th Grammy Awards, the Black Keys performed the song with John Fogerty at Coachella 2012, and Jimmy Fallon performed it with the Muppets when leaving his gig at Late Night. Here, Paolo Nutini teams up with the Kooks, Wolfmother, and Mumford & Songs to faithfully cover a classic, complete with hand-claps, killer harmonica, and some mighty fine fiddling.

3 Responses to “In the Spotlight: Paolo Nutini”