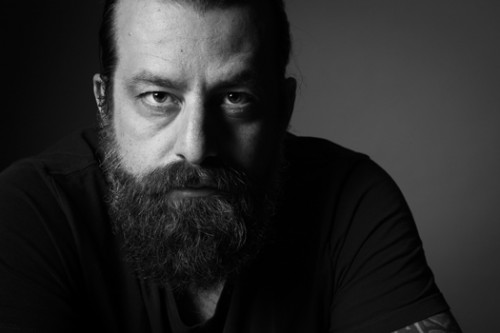 Some cover songs you know are going to fall short. However good the attempt is, all it’s going to do is remind you how good the original was. Richard Thompson’s “1952 Vincent Black Lightning” is one of those songs that, generally speaking, shouldn’t be covered. There are a handful out there, but the only cover truly worth noting is one by The Del McCoury Band. Their version is a bluegrass foot-tapper that fits the song perfectly.

Enter baritone-voiced Sean Rowe with a colorful, tape adorned acoustic guitar amped to the point of distortion. Instead of trying to copy Thompson’s finger-picking approach, Rowe wisely opts to keep pick in hand and use an open tuning, allowing him to travel up and down the neck while keeping the sound full. He plays with the phrasing and dynamics of the lyrics, but doesn’t venture too far afield. It’s a passionate and intense performance. The last two minutes is all guitar; though a little sloppy at times, it builds up like a motorcycle increasing speed, motor revving, about to explode.