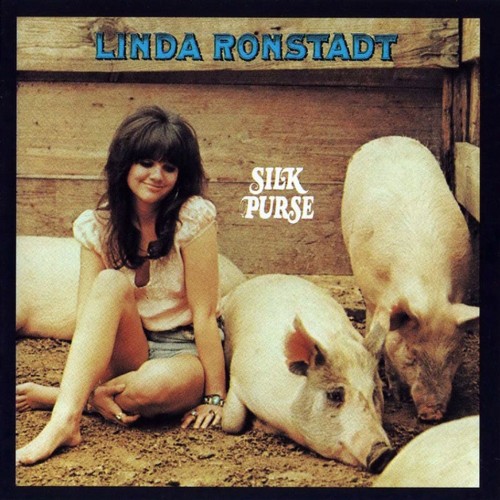 Defense? I never knew Linda Ronstadt was under attack. OK, not true, I’ve known she tends to get many a sneery put-down from “real” musos, dissing both her voice and her choices of material, citing that “real” artists have way more credibility (and way fewer sales.) Beautiful but soulless, they call her and her voice, short on originality and innovation. A famous early putdown was around her being merely a competent backing singer, the irony being that ability potentially defines far greater technique than the relative ease of a solo performance, as those who have sung with her (Neil Young, Emmylou Harris, and legions more) have been more than happy to testify. I guess it stems down to generalizations around any successful artist, particularly if blessed also with photogenicity and famous boyfriends.

Born in 1946, Ronstadt has been amongst the most prominent of the West Coast baby boomers who exploded California into the forefront of music in the early ’70s.  Indeed, Cashbox named her the top-selling female artist of the decade. However, her range has covered much more than the L.A. country rock stylizations she is usually categorized under; her catalog also encompasses Mexican folk,  straight-ahead rock, jazz, gospelly R’n’B, swing, and cajun. Even, God help us, Gilbert and Sullivan. And whilst she has been derided for a lack of her own material and sticking to covers, it can be easily overlooked how influential she was in bringing then-lesser-known artists to a greater audience, from A (Elvis Costello & the Attractions) to Z (Warren Zevon). Many of her songs would be the first time many had ever heard of that particular artist. Lastly, and I realize that this may demolish my argument, she arguably invented the Eagles, recruiting Glenn Frey, Don Henley, Bernie Leadon, and Randy Meisner for her backing band of 1971.

Space doesn’t allow more than a skim through Ronstadt’s 30-odd albums, her 11 Grammys, and her other sundry awards and recognitions, so let’s concentrate on a few scattered highlights.  Following her run of Peter Asher-helmed and hugely selling country-tinged records on Asylum, she seemed to flounder for a while, playing in a number of Broadway musicals, probably largely at odds with her erstwhile fanbase, before joining the Nelson Riddle Orchestra in three massive trawls through the Great American songbook. Whilst commonplace now, it was daring at the time, certainly for a performer from a rock background. Admittedly not to my taste at the time, passing years and a greater familiarity with the songs has softened my view somewhat, revealing her mastery of the style, her purity of voice cutting through the still-smoldering schmaltz of the material. (OK, which Riddle layers on, but this isn’t about him.)

After a brief country diva dalliance with Emmylou Harris and Dolly Parton on 1987’s Trio (reprised in 1999 with Trio II), Ronstadt made a return to her Mexican roots (who knew?) with Canciones de Mi Padre, before finding a 2nd bout of chart favor, this time with 1989’s Cry Like a Rainstorm – Howl Like the Wind, featuring “Don’t Know Much” with Aaron Neville.  Too much sugar for me, but it went to #1 and brought her a new audience.

She again fell off the mainstream radar for me until 2006’s Adieu False Heart, her extraordinary joint piece of work with Louisiana cajun queen Ann Savoy. It proved commercially unviable (#146 on the Billboard chart), but it was great to see Ronstadt was capable of providing yet another blast of fresh air. Sadly, it proved to be her last – Parkinson’s disease was gradually eating away at her control and pitch until her eventual retirement from music in 2011.

To me, Linda Ronstadt’s only crime has been of popularity, and perhaps being too bonny to be taken completely seriously. Pity. I wish her well. Here’s some songs.

Linda Ronstadt – Tracks of My Tears (The Miracles cover)

This Smokey Robinson & the Miracles cover comes from my introduction to her, 1975’s Prisoner in Disguise; I was a fresh-faced undergraduate who found this to be a smoother offering than Emmylou’s Elite Hotel LP, which I’d bought at the same time. Of the two Motown songs included on Prisoner, this is the more successful, brilliantly displaying the similarity /difference between country and soul, by transplanting brass with steel.

Ronstadt’s take on “Alison” was probably the first Elvis Costello song heard by many in the U.S.; its author was said not to like it at the time, though he admitted to having “no objection to spending the money.” I seriously wonder whether that statement was for effect, not least his own forays into country flavors?

From the first of her 2 collaborations with Dolly Parton and Emmylou Harris (there was also one later with Harris alone), this Linda Thompson song showcases the solo and harmony characteristics of each. The liar in question is widely felt to be Richard Thompson, by the way.

I hadn’t even heard of Hummin’ To Myself before researching this piece, delighted that I now have. I gather it was a dud for her, even if topping the jazz chart. I think it’s a corker, vocally holding her own with other interpretations – I’m thinking of the aforementioned Mr Costello’s current touring partner and wife Diana Krall, not to mention the classic Julie London version.

Ronstadt and Ann Savoy teamed up for a gloriously restrained version of the Left Banke’s “Walk Away Renee,” full of yearning, from Adieu False Heart. The LP also includes an exquisite version of Richard Thompson’s “King of Bohemia,” his name cropping up again.

Here’s an odd curiosity from the ’60s: a radio ad for Remington electric razors featuring the unlikely combination of Linda Ronstadt and… Frank Zappa??

11 Responses to “In Defense: Linda Ronstadt”