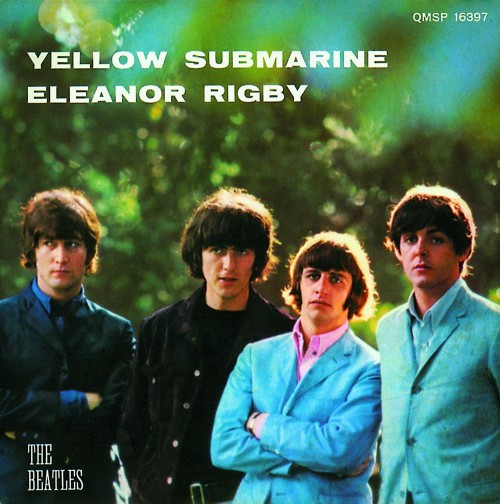 “Eleanor Rigby,” the second track on the Beatles’ Revolver album, may be the most atypical Beatles single. No Beatle played a note on it; instead, they were backed by a small string ensemble. Released as a single, it was the flip side of “Yellow Submarine,” and could not have been more diametrically opposed to that children’s song. It was a song not of love, but of loneliness and death, one that ran counter to their Fab-Four-moptop image. To quote Alan W. Pollack, a musicologist who gave close readings of all the Beatles’ songs, “As one of the most ‘serious’ pieces of the entire Beatles’ canon, this song straight-facedly vaporized several commonly supposed limitations of what the two-minute AM-radio pop/rock musical genre might be capable of including within its purview and power of expression. Pigeon-hole terms, such as Crossover, Fusion, or Hybrid, somehow don’t seem to do it justice.”

Paul McCartney, the main force behind the song’s authorship, started out writing about Miss Daisy Hawkins before changing her name to Eleanor Rigby; years later, a gravestone was found in a Liverpool cemetery, mere yards from where John first met Paul, with that very name on it, and now the world knows more about her than it will about any of us. Paul then tossed the song out for others to add to it. George came up with the “Ah, look at all the lonely people” hook; Ringo, the “darning his socks in the night” line. John’s friend Pete Shotton suggested bringing the song’s protagonists together at the end. John, who later admitted to being embittered by his songwriting partner throwing out the song for just anybody to finish, later claimed he wrote more than half the lyrics. “About half a line,” Paul responded years later.

It may have been cobbled together, but with the help of George Martin’s score and pathos like the top 40 had never seen, “Eleanor Rigby” quickly landed on the list of immortals. It has, of course, garnered any number of covers; Ray Charles and Aretha Franklin hold the crowns as king and queen of the interpreters, but even they couldn’t convince the world that the definitive covers had been done and nobody else should try (not that they ever would). Here are five other tries.

Named, of course, after the Dylan LP, Blonde on Blonde was prog before prog was cool. Their 1969 debut album Contrasts recasts “Eleanor Rigby” so that it sounds like the work of a Renaissance traveling band.

The Free Design brought sophisticated sunshine pop to the masses, but the masses didn’t realize it until two or three decades after the fact. Today, they’re recognized as the vocal pioneers they are, in small but significant circles. This cover of “Eleanor Rigby” comes from their second album, 1969’s prophetically titled You Could Be Born Again.

The Dirt Poor Robins’ CD The Cage is subtitled “An Entirely New, Interesting, Spectacular and Rare Display of Grand and Epic Picturesque Soundscapes that will Dazzle your Senses with a Tremendous and Astonishing Array of Tones.” They’re not wrong. Their cover of “Eleanor Rigby” moves the song from concert-hall piece to Broadway-stage rock.

The soul jazz trio Soulive released an instrumental all-Beatles cover album, Rubber Soulive, in 2010. It’s not all Rubber Soul songs; rather, it touches on albums from Help! to Abbey Road, moving in a smooth, sinuous glide. “Eleanor Rigby” shows them at their tightest and strongest.

There’s more to Gene Chandler than “Duke of Earl” – he had a number of soul hits in the ’60s, many of them written by Curtis Mayfield. His cover of “Eleanor Rigby” uses the same backing track as Jackie Wilson’s version, but where Wilson showed curious restraint, sounding like he was on the outside looking in, Chandler moves in perfect synch with the music’s hints of danger, becoming a part of the story he tells.

If you don’t have Revolver by now, end your shame by getting it from iTunes or Amazon.