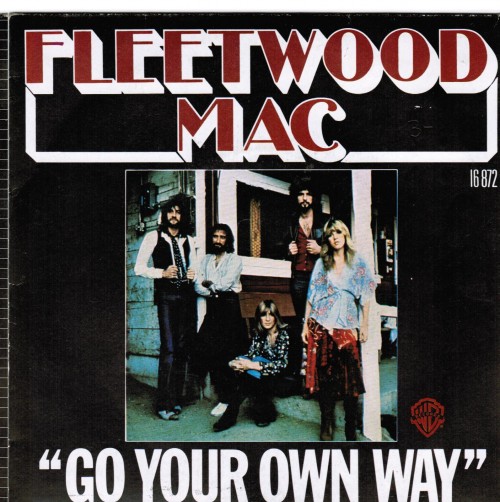 B. Mitchel Reed, one of the most influential DJs in LA, had just played the first single off the new Fleetwood Mac album for the very first time. “I don’t know about that one,” he said dismissively to his millions of listeners. Within minutes he got a call from Lindsey Buckingham, the song’s author, demanding to know what the problem was. “I can’t find the beat,” he said. Suffice it to say that other listeners had a lot less of a problem with “Go Your Own Way” than Reed did.

Buckingham takes part of the blame for Reed’s being unable to find the beat, attributing it to the acoustic guitar track he added at the last minute. “As soon as I came up with the acoustic part, the whole song came to life for me because it acted as a foil for the vocals and a rhythmic counterpoint,” he said later. “So when it comes in, you don’t have a reference point for where the ‘one’ is, or where the beat is at all. It’s only after the first chorus comes in that you can realize where you are – and that’s what that deejay was confused about.”

Mick Fleetwood takes the rest of the blame, attributing it to being incompetent. “‘Go Your Own Way’s rhythm was a tom-tom structure that Lindsey demoed by hitting Kleenex boxes or something,” he explained. “I never quite got to grips with what he wanted, so the end result was my mutated interpretation. It became a major part of the song, a completely back-to-front approach that came, I’m ashamed to say, from capitalizing on my own ineptness.”

You see? There’s far more to this song than slinging accusations of infidelity. If that’s all it was, it wouldn’t still be earning ovations on Fleetwood Mac’s current tour, and it certainly wouldn’t have accrued as many covers as it has. Check out these five (or so).

Lissie’s an old favorite of Cover Me‘s, and her cover of “Go Your Own Way” has already found any number of fans – some may have discovered it in an ad for Twinings Tea, while others first encountered it in the movie Safe Haven. All who hear it have an involuntary reaction – she’s really done something with this song.

Art of Dying – Go Your Own Way (Fleetwood Mac cover)

Before Canadian post-grungers Art of Dying sold out/bought in to the big bad major label, they recorded an acoustic album, Let the Fire Burn, that featured a cover of “Go Your Own Way” that was remarkable in its restraint. The band never explodes in this, never fires up a solo that could cut the song in half, but you never lose the feeling that they’re just about to.

Jacob Thomas Jr. takes an approach that seems so obvious it’s amazing nobody had done it before – he turns “Go Your Own Way” into a he-said-she-said by duetting with Lily Costner (yep, Kevin’s daughter) and tuning in on the sadness inside the arena-rock. “The idea that you could take a song that so many people know and have listened to one way and try to recreate the actual meaning and interpretation the listener has by making it be a thing that two people sing to each other, it gave it a new spin and I really liked doing that,” Thomas Jr. said, concluding with the best reason to do a cover: “I like seeing things that I’ve seen for a long time in a different way.”

The Texas indie-pop-rock band Green River Ordinance takes its name from the city law that prohibits door-to-door salesman from peddling their wares without express permission. If those salesmen were selling copies of their cover of “Go Your Own Way,” the odds of them being invited inside would get considerably better.

An electropop “Go Your Own Way”? Sure, why not – and besides, with avowed fan Derek Nicoletto doing the singing, there’s nothing generic about the results. An insistent synth riff serves as the song’s impetus, while Nicoletto’s vocal uplifts its spirit.

Snow and Voices – Go Your Own Way (Fleetwood Mac cover)

Originally, I didn’t plan to mention the Snow and Voices cover of “Go Your Own Way,” as Cover Me has done so in the past. But that was over five and a half years ago, and we didn’t offer free MP3s then, and the frosty beauty of this version is so very special that it really needs to be shared again – and again and again and again. We’ve taken care of the first part here; the rest is up to you.

For more about the making of “Go Your Own Way,” check out this incredibly detailed reminiscence by co-producer Ken Caillat.