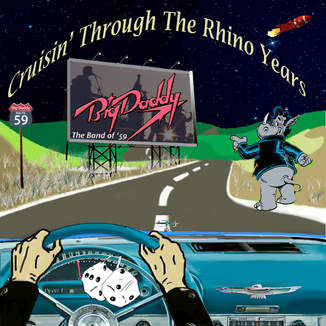 Weird Al Yankovic got a lot of attention this summer (and deservedly so) for releasing a new album that made it to number one on the charts, but he’s not the only novelty master from the ’80s to be doing well for himself lately. Big Daddy, the band that sprayed american graffiti all over the hits of the day back in the day, have a new album coming out next week – Smashin’ Songs of Stage & Screen, which Big-Daddifies songs from hit musicals ranging from Wizard of Oz to Saturday Night Fever. Earlier this year, they also put out a collection of their greatest hits of the ’80s and early ’90s, Cruisin’ Through the Rhino Years, that cherry-picks highlights from the four albums they released for the Rhino Records label. If you’ve already got The Best of Big Daddy, their 2000 compilation, you’ll have sixteen of these songs already – but you’ll want to spring for this to get five more.

Longtime readers of Cover Me may remember our salute to the band’s full-album cover of Sgt. Pepper; if you liked what they did there, you’re in for a treat (or five, if you keep reading)…

If the Everly Brothers album Songs Our Daddy Taught Us had included a song about the kind of girl you don’t take home to Mother, it might have sounded something like this. “Super Freak” goes from street-smart to backwoods-trail-smart, and it left MC Hammer shaking his head and muttering, “Certainly can’t touch this.”

You have to know the million-selling song “Beep Beep” by the Playmates in order to fully get the joke, but not to enjoy what Big Daddy did to “Little Red Corvette.” What’s especially fun about this live performance is how the audience clearly doesn’t know the song that’s being remade until the chorus kicks in; their horror at the end of the third line is delirious fun.

Big Daddy – Once in a Lifetime (Talking Heads cover)

Big Daddy takes the Talking Heads’ world-musical bent to its logical conclusion, giving “Once in a Lifetime” the calypso stylings of Harry Belafonte. David Byrne is on record as enjoying this version; one can imagine him listening to it until daylight come and he wanna go home.

Remember at the beginning of Rocky when Sylvester Stallone walked past the street corner singers (including his brother Frank) singing “Take You Back”? Here’s how those guys might have sounded seven years down the road, recording the theme to Rocky III. The Frankie Valli nod is a nice touch.

Jonathan Coulton’s not the only one to turn this salute to the callipygous among us into a brand new song. Here, Big Daddy give “Baby Got Back” the Kingston Trio treatment for another appreciative audience; they don’t need to hang down their heads and cry about the results.

Cruisin’ Through the Rhino Years is a download-only release, available on iTunes and Amazon, and more Big Daddy material can be found on their website.