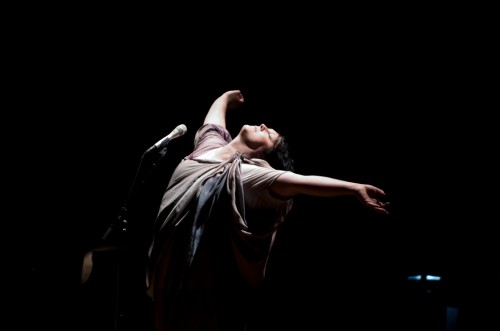 He sounds like a slowed-down Jeff Buckley on female hormones. – Listener quoted in The Times of London
Antony Hegarty has a voice that sounds like it belongs to a Dostoyevsky character. Every song rides on an undercurrent of mournful reflection. – NPR
[W]hat a discovery: a voice like St Theresa’s arrow to pierce the soul. – The Australian
Every emotion in the planet is in that gorgeous voice. – Diamanda Galas
When I heard him, I knew that I was in the presence of an angel. – Lou Reed

It’s that voice that has stopped listeners in their tracks for over a decade now, sounding like it bears deep wounds that have barely scarred over, like it can rise above its own suffering, flutter at a higher level than most can soar. When you learn more about Antony Hegarty – transgendered, big and tall, a youth marked by pain and confusion, a flowering that’s transfixed the music world – it’s easy to become fascinated with everything that he brings to the table.

When Antony covers a song, it’s impossible for the song not to come away from the experience changed – transfigured, even. Witness the following…

John Lennon’s song “Imagine” appeared on Antony’s 2010 EP Thank You For Your Love. As Lennon’s best-known solo work, “Imagine” has been played to the point of dull recognition, and the freshness Antony breathes into it is more than welcome; in fact, it’s a true relief to actually want to listen to the song, for the first time in far too long.

Steven Bernstein’s Millennial Territory Orchestra released an album called MTO Plays Sly, which features jazz covers of songs by Sly and the Family Stone with a round of musical chairs at the microphone. Antony handles vocals for “Family Affair,” breaking away the song’s tough/brittle shell and bringing forth the vulnerability that was always there.

Antony – If It Be Your Will (Leonard Cohen cover)

For a period of about a year, Antony couldn’t sing – his vocal chords seized up, turning his vocals into hoarse cries, and it was only after a series of steroid treatments that he recovered his ability. With that in mind, his choosing to cover Leonard Cohen’s “If It Be Your Will” – with its opening lines, “If it be your will/ That I speak no more/ And my voice be still/ As it was before” – takes on a tremendous amount of meaning, and shows no small amount of bravery on Antony’s part.

Like all interpreters, Antony has come to the Bob Dylan songbook; his choices have been intriguing. His best known Dylan cover, “Knockin’ on Heaven’s Door,” appears on the I’m Not There soundtrack, but he’s also one of a select few who’ve taken on born-again Dylan, with a cover of “Pressing On” from Saved appearing next to “Imagine” on that Thank You For Your Love EP. This version of “I Was Young When I Left Home” comes from Dark Was the Night, one of the Red Hot Organization’s charity compilations; with accompaniment by Bryce Dessner of The National, Antony brings home the loneliness from the opening line, without ever turning it to misery.

Antony and the Johnsons – Candy Says (The Velvet Underground cover)

After Lou Reed’s death, Antony released a statement saying, in part, “Lou was like a father to me. I have never felt so perceived and loved for who I actually am by a man than by Lou Reed. He fought tirelessly for me to have a place in the daylight culture. My career would never have taken off without Lou’s tremendous influence.” Indeed, Lou spent much of his last decade bringing as much attention to Antony as he could, raving about him in interviews and featuring him in concerts. The song Antony sang the most with Lou was “Candy Says,” which Lou said Antony understood like few others could and which Antony called the one song he wished he’d written.

Learn more about Antony Hegarty at www.antonyandthejohnsons.com, and find his music on iTunes and Amazon.

3 Responses to “In the Spotlight: Antony Hegarty”