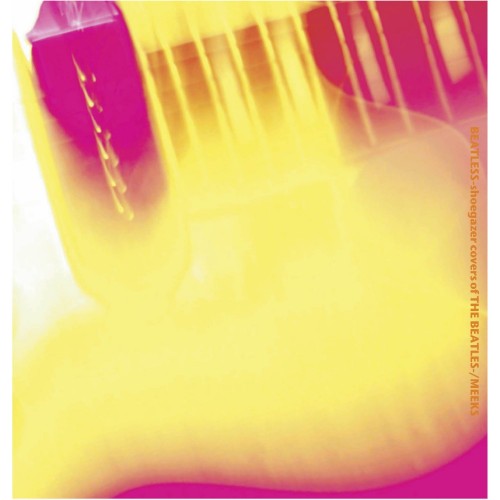 The Beatles being the Beatles, they’ve had several permutations of their work served up in full-album form. Reggae, bluegrass, punk, C&W, lullaby – you name it, somebody out there’s done it. What’s surprising is that it took a good quarter of a century after the genre’s arrival before someone thought of doing an all-shoegazing album of Beatle covers. With their 2013 album Beatless, the Meeks proved that it was absolutely worth the wait.

For those readers who may be unfamiliar with the term, shoegazing was a style of music that flourished in the late ’80s and early ’90s. Named after its artists’ tendency to study their feet as they played – partly out of shyness, partly to keep an eye on all the effects pedals they would be deploying – shoegazing was about big loud waves of guitar fuzz, feedback, and distortion shrouding barely audible lyrics and beautiful melodies. It’s lovely noise, with vocals that are less about what’s being said than the way it’s being said.

It’s kind of a surprise that no one tried a shoegazing Beatles album before the Meeks, an offshoot of the Japanese band Broken Little Sister. Think of it – Beatles songs have some of the strongest, stickiest melodies in popdom, which gives any shoegaze cover the spine needed to build the body of work around. As for the indistinguishable lyrics, well, we know them all anyway. As John Hannah so memorably put it in Sliding Doors, “Everybody’s born knowing all the Beatles lyrics instinctively. They’re passed into the fetus subconsciously along with all the amniotic stuff. Fact, they should be called ‘The Fetals.'”

So, with Beatless, we’ve got the innate knowledge of ten midtempo Beatles songs, plus the chance to explore wholly other versions/visions of them. Listen to some examples and you’ll understand…

Meeks – Across the Universe (Beatles cover)

“Across the Universe,” the opening track from Beatless, quickly sets the tone: barely audible vocals awash in anything-but-barely-audible waves of guitar, making it possible to both get lost in the rock & roll and drift away.

We’ve stumbled across a good number of “Norwegian Wood” covers here at Cover Me, but it’s a safe bet none sounded quite like this – an explosion of a soundscape, with a gentle yet persistent three notes from a piano to provide a border to push off and up from.

Where the original “Nowhere Man” tends to get the most praise for its three-part harmonies, Meeks wishes those harmonies into the cornfield and get to work remaking all those nowhere plans for somebody else altogether.

Meeks – In My Life (Beatles cover)

“In My Life” may be the gentlest song on Beatless – appropriate, as it’s a nostalgic reminiscence for good times gone by. If you have this cover cranked up to eleven, there’s nothing that’ll make you wince at the speakers and turn it down to nine. Which isn’t to say that the electric gauze attack isn’t in full effect.

You won’t find Beatless for sale in America, but you can hear it on YouTube in its entirety. Special thanks to the Facebook page The Guilty Pleasure of the Cover Version for the introduction to this album.