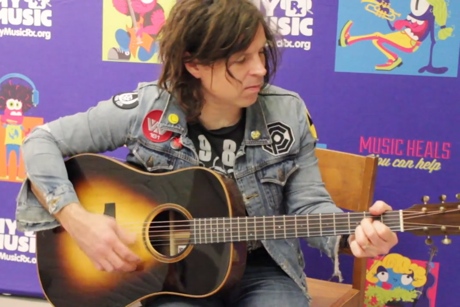 “Wharf Rat” is an interesting song within the vast canon of the Grateful Dead. First performed in 1971 and included on numerous live recordings, it was never released as a studio track. The lyrics recount the tale of the singer meeting an old man, down and out, who then becomes the storyteller. This storyteller approach was later used by lyricist Robert Hunter in the multipart “Terrapin Station.” Musically, the song is not complex, but it features different sections and tempos, abandoning conventional verse and chorus format.

Ryan Adams spent some time touring with Phil Lesh and Friends in 2005 and sang “Wharf Rat” with the band during that time. He returned to the song recently with only an acoustic guitar to perform for MyMusicRX, a group that brings music to ill kids and teens. Despite the questionable appropriateness of lyrics about a wino for kids, Adams talks about how Grateful Dead music lifts his spirits. It’s a lovely version of the song and though many of the Dead’s versions are more dynamic and exploratory, here it sounds like “Wharf Rat” was meant for just voice and guitar.

Find out what Ryan Adams is up to at his strange website.
Cover Me is now on Patreon! If you love cover songs, we hope you will consider supporting us there with a small monthly subscription. There are a bunch of exclusive perks only for patrons: playlists, newsletters, downloads, discussions, polls - hell, tell us what song you would like to hear covered and we will make it happen. Learn more at Patreon.