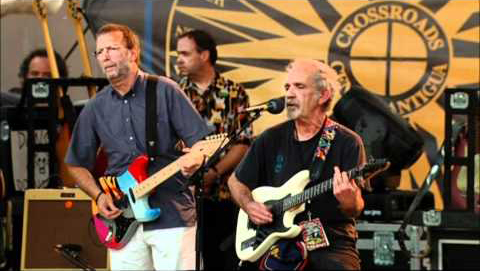 The late JJ Cale had a distinctive, laid back sound to his music that was difficult to replicate. Long time fan and friend Eric Clapton recorded several of Cale’s songs over the years – royalties from “Cocaine” and “After Midnight” probably paid Cale’s mortgage for many years – while never straying far from Cale’s basic approach.

Clapton enlisted a little help from his friends for a new record, The Breeze – An Appreciation of JJ Cale. It is similar to Clapton’s past covers. Cale’s original songs get a little extra polish and studio shine in the hands of Clapton and several guests, including Derek Trucks, Mark Knopfler, John Mayer, Willie Nelson and Tom Petty. Though a little of Cale’s down home vibe may be lost along the way, it says much that Clapton would headline an entire record devoted to Cale’s songs. Listen to Eric Clapton’s version of “Cajun Moon” below.