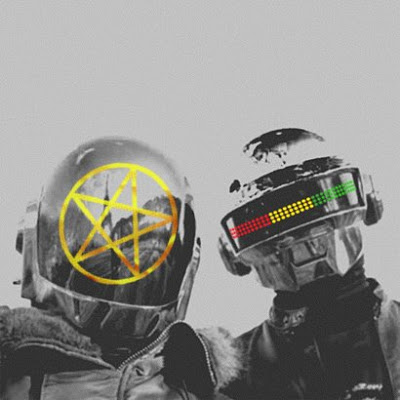 I first became aware of Mato due to his excellent reggae remix of Mayer Hawthorne’s hit cover of The New Holiday’s ‘Maybe So, Maybe No’. I delved a little deeper and found many more re-fixes and re-jiggles he had done. His speciality involves taking the acapella of many a hip-hop classic and giving it a new life with a fresh reggae/dub bedding.

These remixes of hits like Regulate and Still Dre have seemed to give Mato the impetus to really stretch his legs with his latest project. Channelling classic reggae from the likes of legendary labels Studio One and Trojan, Mato decided instead of remixing hits he would instead attempt his own version at a complete makeover of the debut album of music’s favourite pair of disco-robots.

Daft Punk’s Homework has been brilliantly reimagined as if the robots had been assembled by dub pioneers King Tubby and Scientist (in my imagination I envisage them looking something along the lines of this!). Lovingly using all the styles and tricks of classic dub records Mato pulls this off brilliantly. From the heavy reverb-y echo to the use of (legendary dub artist Augustus Pablo’s favorite instrument) the melodica, which reigns supreme on the new version of the robot’s breakthrough hit single ‘Da Funk’.

Here’s the official video for Mato’s reimagined ‘Around The World’, with the original promo lovingly recreated with Mobil toy figures:

Mato’s ‘Homework Dub’ is out now on Stix Records.

(Picture courtesy of now defunct cover blog Versions Galore, no longer active but still well worth a wander around.)