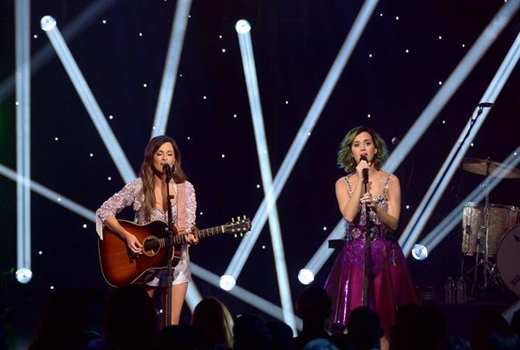 Stepping outside of comfort zones is an interesting test for musicians. Do they only do one thing well or can they sound authentic when they move into other genres? CMT Crossroads recently paired Kacey Musgraves and Katy Perry for a set of each other’s songs and a couple of covers. It may look like a battle of the lightweights, but Musgraves revealed a relaxed stage presence and effortless, clear vocals while Perry’s voice sounded forced, at times, and she seemed to be trying a little too hard, at least on the country tunes.

Though Dolly Parton wrote most of her own hits, “Here You Come Again” was composed by Barry Mann and Cynthia Weil. Musgraves and Perry don’t stray far from the original 1979 arrangement. It may be worth noting that, like Parton, Kacey Musgraves and Katy Perry write or co-write most of their material. Their CMT appearance is all in fun with an emphasis on the cute factor, but watching them side by side makes you think Kacey Musgraves, though less well known, may have more to offer.