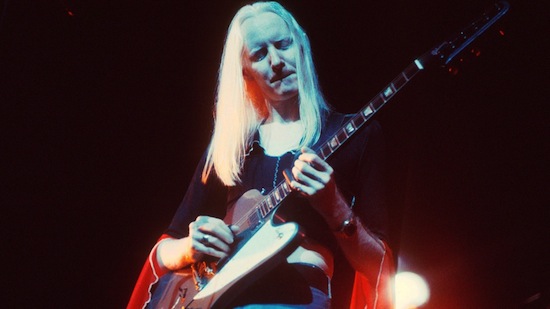 In high school, a friend and I drove two hours to a blues festival in rural Maine one Saturday. When we got to the gate we found tickets to be well outside of our meager budget, but there was only one artist we’d wanted to see anyway: Johnny Winter. So we found a low fence we could peer over, and sat, and waited.

When he came out, the sound was muddy and a seated Johnny didn’t seem to be moving much (then again, at the distance we were at, he would have had to do ballet leaps across the stage for us to notice). But we could hear his guitar loud and clear, and that was all that mattered.

You always hear that line about how B.B. King can get more out of one note than most guitarists could get with 100. Well Johnny Winter was always going to be the guy playing the 100 notes – or 101 or 102. But unlike most hotshot axemen, he was far more than just technical prowess, wringing feeling and danger and passion out of every one of those blazing riffs and solos.

Peering over that fence, I remember being amazed at the huge sounds coming from a man who looked so frail. I have no idea whether that was before or after he finally got clean, but despite the obvious toll his excesses had taken on his body, the music stayed with him ’til the end.

And as a man who only wanted to play the blues, a large portion of that music was covers. We’ve picked five of the best below.


This 1993 Bob Dylan special was the first place I’d heard him. Coming after a succession of safe, predictable choices like John Mellencamp and Willie Nelson, this stick figure with the oversize guitar seemed genuinely dangerous. Hendrix’s “Watchtower” has more historical importance, but when I’m looking for a super-electrified Dylan cover, I’ll usually turn to this.

A guitar player covering a track Buddy Guy played on originally is a risky move, but Winter pushes the volume and energy to the red end of the dial, dispensing with the harmonica that characterized the original for extra shredding.

The medley on 1971’s awkwardly-titled live album Live Johnny Winter And runs almost seven minutes, but that’s nothing compared to this 21-minute version recorded in Sweden a few months after they taped that concert.

One of Winter’s better-known covers, “Jumpin’ Jack Flash” was a reliable crowd-pleaser. He also covered the Stones’ “Stray Cat Blues,” “Silver Train,” and in recent years started throwing “Gimme Shelter” into his sets.

When You Got a Good Friend (Robert Johnson cover)

Not many people listen to Johnny Winter for his acoustic guitar playing, but on the rare occasions he offered it he proved himself a master there too, using his renowned slide to full effect channeling the Delta blues greats.