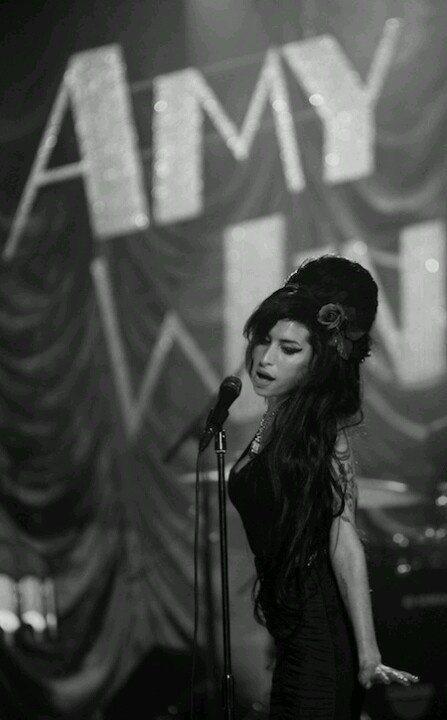 In 2011, the club expanded its membership yet again with blue-eyed soul ingénue, Amy Winehouse.

With her smoky contralto, Bardot-esque winged eyeliner and a beehive to rival any Ronette or Texan beauty queen, Winehouse was a singular pop star whose talent and ataxia sprung forth in equal measure.

Born on September 14, 1983 in North London, Winehouse had the spirit of jazz effervescing through her veins from the jump. The niece of several jazz musicians and the granddaughter of a singer, Winehouse spent her formative years soaking in the music of Dinah Shore, Frank Sinatra, and Sarah Vaughn. These early influences were evident in Winehouse’s first performances with the National Youth Jazz Orchestra. It was around this time she started to catch the ear of local A&R scouts, and in 2002, she signed with Island Records and released her debut album, Frank – named in honor of the Chairman of the Board himself. Frank went three times platinum and firmly established Winehouse in the firmament as a bona fide star.

During this time, she was shortlisted for the Mercury Music Prize (an honor for the best album produced in the British Isles), performed on the Jazzworld stage at Glastonbury, and started a tumultuous on-again-off-again relationship with Blake Fielder-Civil. This stormy relationship was a Molotov cocktail of frenzied public displays of affection (Winehouse blowing kisses and screaming, “I love you” at Fielder-Civil’s bail hearing), self-harm (video of Winehouse carving “I love Blake” into her stomach with a shard of glass), and explosive arguments which left both parties bloody and bruised.

The unbridled tension between the duo fueled inspiration for Winehouse’s sophomore effort, Back to Black. This album catapulted Winehouse into the mainstream, spawned a bevy of hit singles, eventually went 11 times platinum in the United Kingdom and two times platinum in the U.S, and won five Grammys including Best New Artist and Record of the Year. Intensely personal and agonizingly honest, Back to Black might as well have been called Back to Blake, as Winehouse laments and howls over lost love with lines such as, “I don’t know why I got so attached/It’s my responsibility/And you don’t owe nothing to me/But to walk away I have no capacity,” from “Tears Dry On Their Own” and, “Get on without my guy/You went back to what you knew/So far removed from all that we went through/And I tread a troubled track/My odds are stacked/I’ll go back to black,” from the eponymous hit single. “All the songs are about the state of my relationship at the time with Blake,” Winehouse told Rolling Stone. “I had never felt the way I feel about him about anyone in my life.”

Touring in support of the album, Winehouse performed several summer festivals, including another stint at Glastonbury (complete with the most dapper full backing band this side of Charlie Watts), a sluggish set at Chicago’s Lollapalooza, and a performance at Belgium’s Rock Werchter festival. As the year progressed, touring took a toll on Winehouse, and her live performances suffered. At a show at the National Indoor Arena in Birmingham, England, an inebriated Winehouse broke down sobbing and confronted booing fans by screaming obscenities at them. Unfortunately, this kind of shambolic performance became par for the course, and the rest of the tour was abruptly cancelled, with Winehouse stating, “I can’t give it my all on stage without my Blake. I’m so sorry but I don’t want to do the shows half-heartedly; I love singing. My husband is everything to me and without him it’s just not the same.”

Despite her plaintive wail that she wouldn’t go go go, Winehouse did enter rehab in 2008, the first of several stays in rehab facilities, after video footage emerged of the singer smoking crack cocaine. The following year was equally if not even more tumultuous for the embattled chanteuse; she was arrested on assault charges, barred from entering the U.S. to play Coachella, officially filed for divorce from Fielder-Civil, and charged with assault once more, this time for punching and kicking a theater manager during a family-friendly production of Cinderella.

The final years of her life were more of the same – assault charges, rehabs and relapses, inebriated performances, and the odd stint of creating more music. Her last recording was a duet of jazz standard “Body and Soul” with legendary crooner, Tony Bennett.

Three years ago today, on July 23, 2011, Winehouse was found dead in her home in Camden, London. According to the coroner’s inquest, the official cause of death was death by misadventure – a euphemistic way of saying alcohol poisoning. At the time of her death, Winehouse’s blood alcohol level was 0.416% – more than five times the legal drink-dive limit.

Artists have a tendency to romanticize death. It’s better to burn out than fade away and certainly more appealing to live fast, die young and leave a pretty corpse – but as Winehouse herself would say, “What kind of fuckery is this?”

Death robs us of not only burgeoning talent but also of promise. There’s no way of knowing what Amy Winehouse would have accomplished had she not died. She might have gone on to become a grand old dame of the stage, singing torch songs well into her sixties a la Aretha Franklin. She might have found true love. She might have started her own rehab where other struggling musicians could find solace and redemption. Hell, she might have hung up the beehive and spent the rest of her days coddling kids and grandkids in a little cottage in Cotswolds. But we’ll never know and we’re worse off for it.

RIP, Amy Winehouse. To co-opt her own words once more:

Performed as a Grammys tribute to the late singer, Bruno Mars brought all of his matinee idol shimmer and sheen to this performance. Musically, it’s closer to the Zutons, but Mars’ soaring, aching vocals are a love letter to the late diva. Charged with finger snaps and brass as bold as love, Mars ends this tribute as sweetly as one could, rallying the audience to clap their hands and croon, “Amy, I love you darlin’/Amy, we’ll miss you, baby. You’ve got the whole world singing.”

Amy Winehouse – All My Loving (The Beatles cover)

Winehouse rewrites the Book of Lennon-McCartney with this cover. Instead of a mid-tempo pop number, Ms. Winehouse lays it on thick like warm honey and her soulful and slow wail is punctuated only by the sparse open chords of an acoustic guitar. But honestly – with that voice and those lyrics? Everything else seems extraneous.

Formed at end of World War II (that’s 1945, for all of you who slept through history class), the Jolly Boys have been performing mento music for longer than my parents have been alive. In addition to being a delightful candy treat, mento is a form of Jamaican folk music that heavily influenced both reggae and ska. In the hands of the Jolly Boys, “Rehab” becomes a far more percussive track, with the rhumba box out in full force as lead singer Albert Minnott has more fun singing this song than most anyone has ever had.

Cheeky English boys cover cheeky English girl and all is right with the world. The Arctic Monkeys aren’t nearly as mournful as Winehouse and take this song in a different direction. Instead of a lament of lost love, it’s a warning to any would be suitor. I know they’re trouble. I know they’re no good. And yet, I always manage to sniff them out like Tanqueray.

One Response to “In Memoriam: Amy Winehouse”