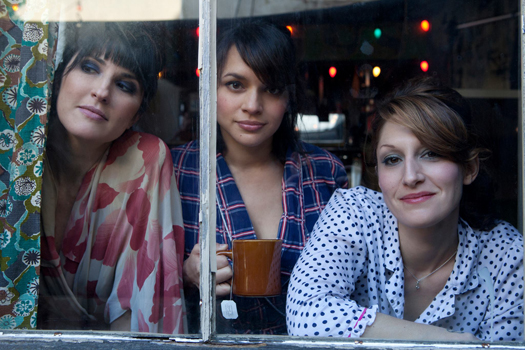 Neil Young may be guilty of inspiring too many bad rock and roll bands. If you weren’t already in a band in 1969, hearing “Down By The River” convinced you that anyone could play rock and roll. With an extended two chord jam and deceptively simple, awkwardly phrased guitar solos, the song was immediately accessible. Thousands of garage bands were formed with what seemed like the sole purpose of butchering this tune.

Norah Jones likes to form bands, too. Her latest one, Puss n Boots, is a trio with vocalist, multi-instrumentalist Sasha Dobson and bass player Catherine Popper (formerly with Ryan Adams and Grace Potter). In advance of their debut album, No Fools, No Fun, they have released a live recording of “Down By The River.” Norah, on guitar, has some fun with a Neil-inspired guitar solo. With just guitar, bass and drums, this version retains much of the simplicity, if not quite the intensity, of the original. In the hands of Puss n Boots with Norah Jones singing, the song is elevated far above garage band antics.