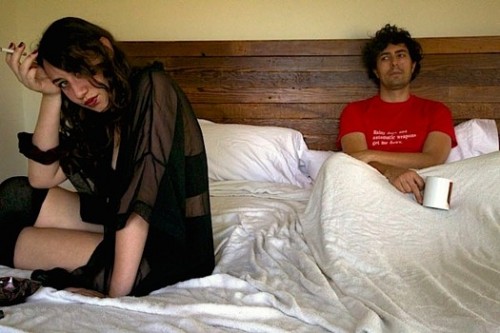 1994. A brilliant year for music. In my native UK, we heard the first rumblings of Britpop with the release of Oasis’s ‘Live Forever’, ‘Parklife’ by Blur and Primal Scream’s ‘Rocks’. Stateside, Green Day released their classic ‘Dookie’, Johnny Cash had his his renaissance with his first Rick-Rubin produced album, and Outkast unleashed their debut.

Indie synthpop duo Ray & Remora (who occasionally go by their real names of Dan Crane and Amanda Walker) have paid tribute to this great time in the world of music by releasing an EP of songs originally released in that year including ‘Say It Ain’t So’ from Weezer’s debut album and Dinosaur Jr’s alt-rock classic ‘Feel The Pain’.

Here, however, they cover another revered track from that same year, ‘Gold Soundz’ by Pavement. Now some of you may say, yeah you told us that news back in April. Well, just look at who they got to turn up for the video; rock royalty with Sonic Youth’s very own Kim Gordon, Scott Shriner from Weezer, part-time Beastie Boy Money Mark, Inara George from The Bird And The Bee (who, by the way, released a brilliant Hall & Oates cover album not long back!), legendary film icon Jeff Goldblum (plus his dog!) and finally, Pavement’s very own Stephen Malkmus!

The ‘1994’ EP, also featuring songs by Guided By Voices, Sebadoh and Superchunk, is out now.