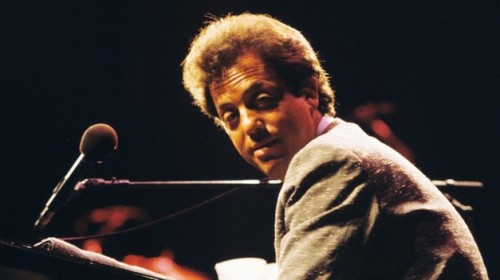 As of today, Billy Joel is eligible for Social Security. So, now that his money woes are assuredly a thing of the past, let’s get to celebrating his 65th birthday in the accomplished style he really and truly deserves.

Joel has had a very rough go of it over the years as far as acceptance from rock critics goes – Chuck Klosterman gave an excellent summation of the conflicts in this piece (which Joel loathed) – but there’s an aspect of his career that runs contrary to those of nearly every star of the ’70s and ’80s who’s still touring. It’s this: Joel hasn’t released a studio album in more than twenty years. River of Dreams, his 1993 swan song, went to number 1 and had a top-five single in its title track. Consider that Elton John’s released six albums since the turn of the century and Paul McCartney’s released nine, and think how well you know the songs from those fifteen albums, and say a silent prayer of thanks that Billy Joel knew when and how to go out, that he knew to stop saying something when he didn’t have anything to say. That’s a rare, rare quality, to have the discipline to allow top-notch work to be your final echo. I say this with no snark – Billy Joel knew how to call it quits.

So let’s talk about what he’s left us, shall we?

From the opening “Be My Baby” drumbeat and castanets, Joel intended “Say Goodbye to Hollywood” to be a tribute to the (wall of) sound of Phil Spector. The marriage of El Lay and Joisey was replicated a year later, when Ronnie Spector, ex-Ronette and ex-Mrs. Phil, recorded a cover of it with the E Street Band, proving once and for all that lightning does strike twice.

Dolly Parton had to fight to get a Billy Joel song on her 1999 album The Grass Is Blue; considering the results of “Travelin’ Prayer,” which include a Grammy Award for Best Female Country Vocal Performance, we’re all glad that’s a fight she won. Considering that the original featured Eric Weissburg of “Dueling Banjos” fame, it’s a wonder that Parton had to persuade anyone how well the song would translate to bluegrass, but the final product proves that she knew what she was doing.

Isaac Hayes – Just the Way You Are (Billy Joel cover)

Barry White recorded a cover of “Just the Way You Are” that’s just as Barry White-esque as you’re imagining it is. But Isaac Hayes’ version crushes it. Starting with a message to a lady that goes on for almost three minutes, Hayes rolls on into six and a half more minutes of s-l-o-w burning soul that takes the song off a wedding dance floor and lays it down on the honeymoon bed.

We’ve featured the Diamond Family Archive’s cover of “She’s Always a Woman” before, but that’s certainly no excuse not to bring it back into the spotlight. Really, this is less a cover than a reinvention, giving the song some more room to breathe and sounding more accepting of than resigned to the woman’s flaws.

“When I wrote ‘Only the Good Die Young,’ the point of the song wasn’t so much anti-Catholic as pro-lust,” Joel said about his ode to a high-school crush, the perfectly named Virginia Callahan. For Melissa Etheridge, a high schooler when the song was released, it hit really close to home: “When I was a youngster… a girl could not sing this song. But this song, of all his songs, really resonated with me.” Now that “Come out, Virginia” is more likely to bring to mind an image Joel probably didn’t have when he wrote it, Etheridge is free to belt out “Only the Good” as only she can. She got to perform it for Joel at a recent town hall event hosted by Howard Stern; Joel loved this performance, saying with approval, “It was dirtier than mine was.”

Billy Joel can be found on iTunes, Amazon, and www.billyjoel.com.

4 Responses to “They Say It’s Your Birthday: Billy Joel”