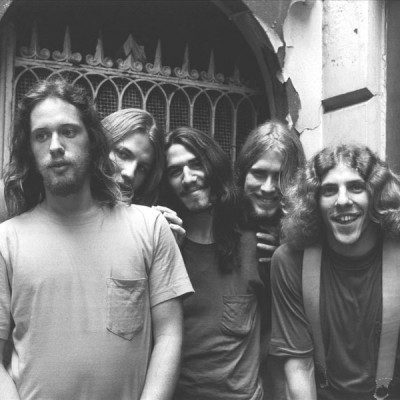 Founded in 1967, the name is short for New Rhythm and Blues Quartet (except when it’s Quintet). They’ve played for the Simpsons, Captain Lou Albano, and Sun Ra. No other band can say this (or would probably even want to). NRBQ is a band that many fans feel never got the recognition they deserved. But that’s what any good fan would say, and having a recording career that nets you so many hardcore fans (including Bob Dylan, Paul McCartney, and Elvis Costello, to name a few), I think they’re very appreciative of the love they’ve gotten. And it shows in their performances.

With their amazing grasp of popular music, it should be no surprise that they do a fantastic job of choosing songs to cover. Being able to pull off a perfect pop song from any genre, surprise the audience, AND get a big smile? Nailed it.

A song written in 1925 fits right into the NRBQ catalogue. How did they find this song? Were they just trying to trick people who were expecting to hear a little Simon & Garfunkel? It doesn’t matter. It’s fun and it has NRBQ written all over it.

NRBQ – My Girl (The Temptations cover)

Oftentimes NRBQ went for the more obscure songs, but even when they do pick a popular song, it’s an impeccable choice that lets the musicianship shine through. Witness this cover of the Temptations’ “My Girl” (co-written by Smokey Robinson), where they show a bit of soul.

NRBQ shows their chops at reggae/calypso with this funky song, then give it an odd twist by overlaying some hoedown commands over it for lyrics. Any surprise that the audience loved wherever the concert might take them?

Why NOT cover a song that was sung over the opening titles of a movie of the same name? As is often the case, it’s hard to say how many members of the audience recognized which songs were covers, but the songs all fit in to the NRBQ world so well it didn’t really matter.

A fun, rollicking little number (sometimes called “This Ole House”), originally written by Stuart Hamblen after a hunting trip with John Wayne. It’s been covered plenty of times, but only NRBQ could make letting a house fall apart sound so much fun.

Just to hit home how odd a NRBQ show could get, this song was pulled out of a hat. NRBQ played it in a style that doesn’t exactly suggest reverence, but reverence can be pretty boring. This avoids that.

Way more soloing then any Fats Domino version I ever heard. Guitar gets a turn, but more notable is the clavinet solo that shows up. Why not?

There’s plenty of NRBQ to be found on iTunes and Amazon, plus some great concert bootlegs that wouldn’t take you more than a quick Google search to find.

2 Responses to “In the Spotlight: NRBQ”