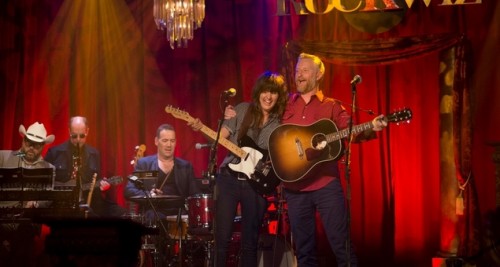 Listening to Courtney Barnett’s narrative style of solo work (prime example: “Avant Gardener”), it’s clear a Lou Reed influence is at play. So perhaps it’s no surprise that, when teaming up with folk veteran Billy Bragg, the two would turn to The Velvet Underground. Barnett opened for Bragg on his recent Australian tour. They took time together to record “Sunday Morning” for RocKwiz, the Australian TV show.

“Sunday Morning” was a nice choice of song for this pair. With a tune more melodic than most of her own material, Barnett’s voice shows nicely; she blends well with Bragg. Lightly supported by a full band, Barnett’s Telecaster shimmers against Bragg’s strummed acoustic. Most of all, the two look like they’re having a great time. Let’s hope they do more together. Watch and listen to Courtney Barnett and Billy Bragg below.

Catch up with Courtney Barnett at her website and Billy Bragg at his.
Cover Me is now on Patreon! If you love cover songs, we hope you will consider supporting us there with a small monthly subscription. There are a bunch of exclusive perks only for patrons: playlists, newsletters, downloads, discussions, polls - hell, tell us what song you would like to hear covered and we will make it happen. Learn more at Patreon.