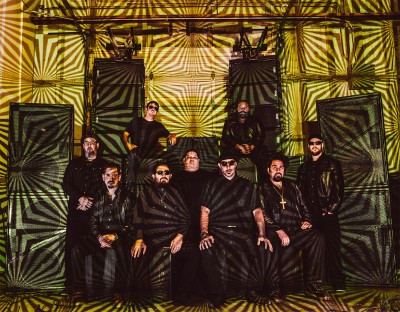 Latin funkateers Brownout are currently gearing up to unleash the funk all over the back catalogue of metal legends Black Sabbath. They’d already teased us with ‘Paranoid’ album track ‘Hand Of Doom’, a song that originally sounded trip-hop-before-it-was-a-thing so which lent itself excellently to the twist the Austin outfit gave it.

They’ve now given us another taste of their forthcoming album of Sabbath covers with ‘The Wizard’, with guest vocalist Alex Marrero taking on Ozzy duties. Replacing the often-sampled harmonica with a great horn section, the song kicks off in spectacular style. It loses none of it’s urgency and still rocks those massive guitar and drums parts. The real joy for me comes when the breakdown starts at 2:30 sounding like it has a million and one breaks future crate-diggers can mine. Oh and like the original there’s cowbell, lots of cowbell.

The LP is expected to include other fan favourites ‘N.I.B.’, ‘Planet Caravan’ plus the eponymous debut album opener ‘Black Sabbath’. Hear and read more at http://brownoutmusic.tumblr.com/ ‘Brown Sabbath’ is out on June 24th.