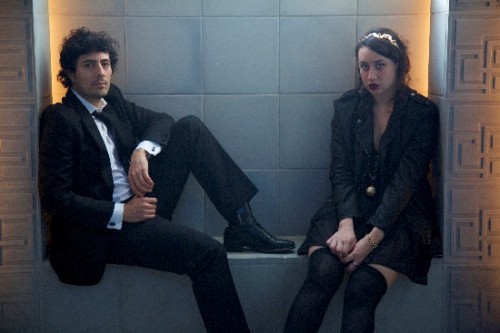 1994 was 20 years ago. That may not be news to many of our readers, but there is a certain 30-something subset of you who just sprayed your screen with water in a hilarious spit-take that would not be at all out of place on the show Friends (also 20 years old this year, by the way).

It’s hard to believe that it’s been 20 years since alt-rock became truly ubiquitous, with Weezer, Green Day, and the Offspring joining pioneers Nirvana, Pearl Jam and Soundgarden on the radio. And Pavement, indie darlings before that was even a phrase, released Crooked Rain, Crooked Rain. With an off-key, stuttering sound, they made music for the fans who dared to dig a little deeper into alternative music.

LA-based duo Ray & Remora, also known as Dan Crane and Amanda Walker, decided to cover some of those classics from 1994 and put them on an EP called, shockingly, 1994. As they say over at PureVolume, Crane and Walker “are both massive Pavement fans,” and they decided to take on the song “Gold Soundz.” But don’t expect the same off-kilter guitars or unaffected vocals found in the original; Walker’s softly pleading voice is bolstered by spacey synths and echoing electronic drums. Some weird noises in the bridge are about as “alternative” as this gets, but the whole thing works surprisingly well as an electro-pop song. Check it out below and then keep an eye out for the rest of Ray & Remora’s EP, out on May 6th. via PureVolume.

Find out more about Ray & Remora at their website.