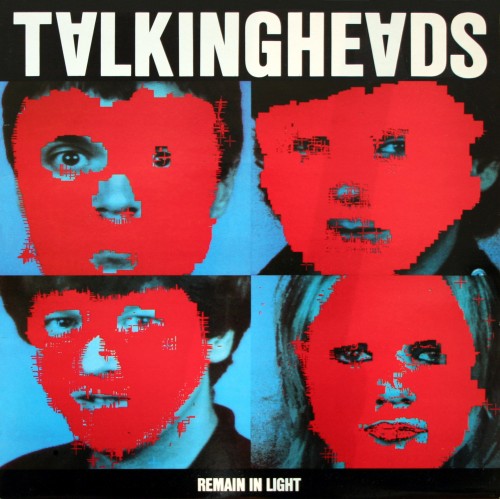 In October of 1980, I was a college junior and assistant program director of WPRB-FM. It was my responsibility to swing by the post office every day to pick up the station’s mail, including the packages of records. This meant that I got to see the new releases before anyone else. By that time, I had become a pretty big Talking Heads fan (and rued my error in having skipped their show on campus back in my freshman year). We fans knew that the band was moving in new directions after the previous year’s Fear of Music, which had begun integrating more complex rhythms, dance beats and world influences into their sound, and the music press was buzzing with anticipation about what they were going to do next. So, on that cool October morning, when I ripped open the box from WEA as I walked toward the station, I was thrilled to see Remain in Light. After scurrying down into our basement office, I quickly threw the record on the turntable, and was immediately blown away.

What I heard was an intoxicating mix of new wave, dance, rock, electronic and ambient music, all bound together with what I learned to call African polyrhythms. It was unlike anything I had ever heard, and for good reason — it was a groundbreaking album, created and performed in an unorthodox fashion. As the needle moved to the end of “The Overload,” I felt like I had taken a long musical journey to places where I had never gone before. I made sure that we got the album on the air at once, and we played it constantly. It remained in my personal heavy rotation for years, and is still on my desert island disc list.

Remarkably, the impetus for Talking Heads’ masterpiece was the near breakup of the band. Chris Frantz, the band’s drummer, and his wife, bassist Tina Weymouth, had considered leaving because of their dissatisfaction over singer David Byrne’s level of control. They took a long trip through the Caribbean, and became immersed in local sounds, including reggae and Haitian music, much of which has African roots. Byrne and guitarist/keyboard player Jerry Harrison joined Weymouth and Frantz at the Compass Point Studios in the Bahamas, where they decided to try creating music by jamming, rather than following their prior practice of writing music to Byrne’s lyrics. The goal was to break the singer/band dynamic and create more of a communal approach, influenced by the great African musician Fela.

Producer/musician Brian Eno joined the band, and decided to produce after hearing the new sounds that they had created. The spontaneity and outside-the-box thinking appealed to Eno’s personal philosophies, and the band benefited from his talents in wrangling the relatively primitive computers and synthesizers of the day (not to mention wrangling the appearance of then-obscure guitarist Adrian Belew) to create the necessary samples and loops.

It took Byrne some time to come up with lyrics, which he created by recording improvised rhymes until they began to make sense to him. Byrne also decided to change his vocal style to fit the band’s new sound, and his vocals were recorded in New York and California. Brass and funk/soul-style background vocals (mostly by Nona Hendryx) were added later and the album was finished in late summer, 1980.

After its release, Remain in Light was commercially and critically successful, making numerous “Best of” lists over the years. The core Talking Heads, augmented by Belew and other musicians necessary to recreate the dense music, toured in support. A similarly expanded band can be seen in the film Stop Making Sense. Interestingly, though, the band’s next album, Speaking in Tongues, was a bit of a step back from the sound of Remain in Light, and proved to be their commercial breakthrough.

One of the striking things about Remain in Light is how it starts with uptempo songs before moving (in the middle of what was Side 2) toward slower, more ambient sounds. So, when looking for good covers of songs from this album, it became harder and harder to find covers for the later, less catchy tracks. In fact, at least one live tribute to the album available on YouTube simply leaves out the last song. But despair not, because our research was rewarded, and we have found worthy covers of each song on this great album.

The opening track of Remain in Light, “Born Under Punches” is an excellent introduction to the album’s synthesis of the old and new Talking Heads. The music is funky and complex with electronic touches; it also features Byrne’s trademark alienated-guy lyrics. For fairly obvious reasons, the songs from this album are popular with electronic musicians, who use current technology to recreate the record’s multiple layers of sound relatively easily. This cover by Sovyetskiy Brezhnev (which despite its name hails from Japan) is an instrumental, thus highlighting the synthesized funk, and even throwing in some sax, or sax-like sounds.

The propulsive “Crosseyed and Painless” was released as a single, and although it didn’t make the pop charts, it reached the top 20 on the dance charts. Similar in its mix of sounds to the opener, if maybe a bit less African and a bit funkier, “Crosseyed” also features a rap by Byrne that was influenced by Kurtis Blow’s recently released single “The Breaks.” This version, by Tiny Boxes, a band founded by the underappreciated former Gong guitarist Bon Lozaga, retains the complex rhythms, but has more of a jam band feel, including some scorching guitar by both Lozaga and Matt Williams.

Side one of the original vinyl ends with the exhilarating “The Great Curve,” featuring call and response vocals and barely-controlled soloing by Belew, all over an irresistible dance beat. Portland, Oregon-based electronic musician Heather Perkins tackled the song in 2011 for her “365.52.12 Project” in which she recorded or worked on a song every day of the year, and published a song at the start of each week. “The Great Curve” was Song 28, for the week of July 11 – 18, 2011. As Perkins wrote, “the original Talking Heads version is really fast and furious, with tons of overlapping vocals, sometimes three or four separate simultaneous vocal parts, each singing different lines. I decided to do a stripped down funk version.” Not only is her version “stripped down,” there is something a bit scary about it, in contrast to the joyousness of the original.

Easily the most popular song from the album (critic Robert Christgau called it “the greatest song Byrne will ever write”), “Once in a Lifetime” also spawned the iconic music video with Byrne acting like a marionette while intoning existential lyrics about the absurdity of life. It is also rhythmically complex, with different band members using varying counts, and even creating unique tracks, unaware of what the rest of the band was doing. These tracks were mixed and faded together by Eno to create the final product. This is probably the most covered song on the album, and we are ignoring, among others, Kermit the Frog (wearing a Big Suit)  and the Smashing Pumpkins to feature the obligatory bluegrass cover, by Blind Corn Liquor Pickers. The Pickers describe their sound as “Kentucky bluegrass stretched to its modern limits,” and this cover is somewhat more creative than the typical breakneck-speed bluegrass cover.

Remain in Light begins to slow down and become mysterious with “Houses in Motion,” the second single from the album. Featuring a sinuous beat, intoned vocals and distorted trumpet from Eno collaborator Jon Hassell, the song acts as a transition from the upbeat dance/pop/funk that opened the collection to the more atmospheric and weighty conclusion. It would not have sounded out of place on the Byrne/Eno collaboration My Life in the Bush of Ghosts. The unfortunately named Genital Hercules, a now-defunct band from the Midwest, covered the song live at a benefit performance in 2004 in Iowa in support of GMO food labeling. Considering that it is live, they do a good job of recreating the textures and foreboding of the song.

“Seen and Not Seen” consists of Byrne speaking over a slow, repetitive groove, punctuated by electronic wooshes and bleeps. The narrator seems to be reflecting on perception, image, and one’s ability to create and mold appearance. This cover by Jeff Heller was, according to his Soundcloud page, created entirely on Logic Pro. Heller successfully constructs a track with a similar sound and feel to the original, but his portentous vocals seem to shift the tone of the song from uncertainty to pomposity.

Remain in Light takes a sinister turn with “Listening Wind,” an atmospheric, Middle Eastern-influenced character study of an anti-American terrorist. It is a song that Byrne acknowledged would be more difficult to release today than in 1980. Eno, whose involvement in Remain in Light was crucial, also served as an important contributor to Genesis’ The Lamb Lies Down on Broadway, which of course featured Peter Gabriel, and he has also worked with Gabriel on solo projects. Recently Gabriel, who seems to have hit somewhat of a writer’s block, has focused on projects that didn’t require him to write new songs, releasing Scratch My Back, an album of covers, and And I’ll Scratch Yours, a collection of other artists’ covers of Gabriel’s songs. Gabriel’s cover of “Listening Wind,” backed by an orchestra, is somewhat less creepy than the original, and maybe more sympathetic to the protagonist; this is consistent with Gabriel’s singing style, which is more emotional than Byrne’s typical detached approach. Here are Byrne’s comments on Gabriel’s version, and here is Byrne’s synthy reciprocal cover of Gabriel’s “I Don’t Remember.”

A bleak, slow, sonically manipulated soundscape that concludes the album, “The Overload” dissolves into nothingness. An album that began with the danceable “Born Under Punches” ends in a fever dream of loneliness and despair. Reportedly, it was an attempt by Talking Heads to recreate the music of Joy Division, despite the fact that none of the band had actually ever heard Joy Division, a remarkably oblique strategy. Phish, a band that would seem to have little in common with either Talking Heads or Joy Division, performed a full album cover of Remain in Light as part of their Halloween show in 1996. I tried to avoid going to that fairly obvious well, but theirs was the only cover of “The Overload” that I could find. They do a nice job of recreating the dirgy, depressing sound, and the recording simply fades into crowd noise.