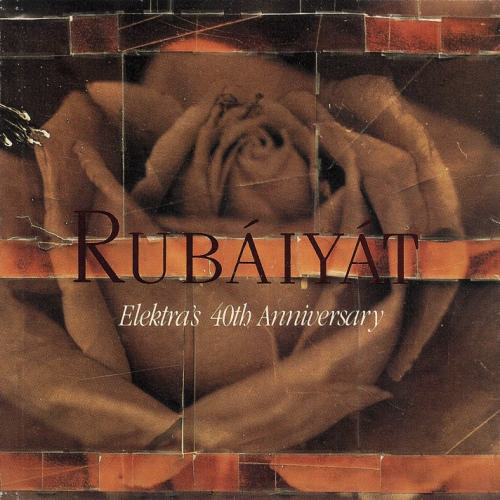 The Elektra label has a history of celebrating itself with various books and anthologies, but then, there’s a lot to celebrate. Started by a teenaged Jac Holzman in his dorm room in 1950, it grew into major label status while retaining an eclectic roster of musicians who were given the chance to spread their artistic wings, just as likely to reach pinnacles of cult fandom (Tim Buckley, Love) as pinnacles of worldwide success (the Doors, Queen). In 1990, Elektra celebrated its 40th anniversary by releasing Rubaiyat, a 4-LP/2-CD/2-cassette box set with a unique premise – the label’s current artists covering songs from the label’s prior artists. Rarely have such disparate musicians rubbed shoulders as they do on this release, whether on levels of dissimilarity (Tracy Chapman and Metallica – together again!) or familiarity (the Shaking Family was infinitesimally as well known as the Cure), but that was the point, and they all got together here for some fine and enlightening work.

The Rubaiyat cover that’s gotten the most attention would probably have to be the Gipsy Kings’ version of the Eagles’ “Hotel California,” thanks to its inclusion in The Big Lebowski years later. That’s not to dismiss the other songs on the album out of hand – anybody who heard this collection, regardless of background, would come away with a favorite. Here are some of ours.

Love was one of Elektra’s keystone artists – their signing helped usher the label into the rock era, and influenced the Doors to sign with Elektra as well. Billy Bragg covered the band’s highest-charting single, “Seven & Seven Is,” with equally dynamic drumming and apocalyptic ending. Little did anyone dream that before the decade was out, Bragg would be teaming up with Wilco to cover Woody Guthrie songs on Mermaid Avenue.

Before Bjork made such an innovative name for herself, she was the lead singer in the Sugarcubes, the first Icelandic band to find success in America. Together they covered “Motorcycle Mama,” the one hit by the one-album wonders Sailcat, trading in the pokey-folky sound of the original with a little more growl and a lot more of a kick.

The Happy Mondays were down to record a cover of John Kongos’ “He’s Gonna Step On You Again” for Rubaiyat, but once they got through with “Step On,” they knew they had a smash on their hands, so they decided to keep it for themselves. Rather than leave their label tribute in the lurch, they recorded “Tokoloshe Man,” another song from the Kongos album. It’s a decent cover, but it wasn’t going to twist anyone’s melon.

They Might Be Giants – One More Parade (Phil Ochs cover)

Scuttlebutt has it that They Might Be Giants had a cover of Queen’s “We Will Rock You” all ready to go, but Metallica wanted to cover “Stone Cold Crazy” and they didn’t want any other Queen covers getting in their way. The Johns graciously stepped aside and took a shot at Phil Ochs’ anitwar song “One More Parade” instead. The result was nowhere near as goofy as casual fans may have been expecting, but it showed that TMBG had more than one kind of arrow in their quiver.

John Eddie’s first recording for Elektra was this cover of the Cure’s “Inbetween Days.” It proved to be his last – for mysterious reasons, the label dropped him without releasing the album he recorded for them, and he wouldn’t be heard from again until well into the 21st century, when “Let Me Down Hard” (from the painfully appropriately titled Who the Hell is John Eddie?) got a toehold on triple-A radio. Judging by how well he applied the heartland sound to the Cure song here, we missed out on an awful lot from him for nearly fifteen years.

The Cure was one of only two artists to cover and be covered; the other was Jackson Browne, whose “These Days” got an unsurprising treatment from 10,000 Maniacs – even if you’ve never heard it, you already know exactly what it sounds like. Likewise, Browne takes the Incredible String Band’s “First Girl I Loved” and makes it entirely his own – you’d never know how much sway the original held over acoustic Led Zeppelin if you only knew this version.

Rubaiyat is out of print, but you never know what eBay has to offer…