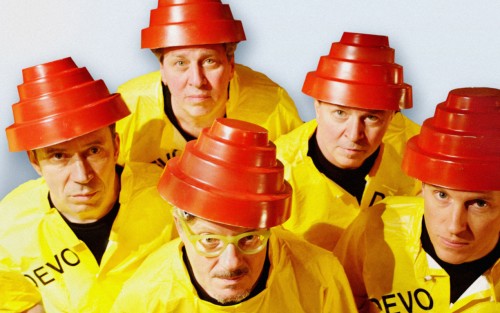 In the early ’70s, two sets of brothers and their friends, art students at Kent State University, developed a theory. It began as a kind of joke based on a religious pamphlet that alluded to the D-evolution of the unenlightened man. As artists tend to do, they created some performance art and music around this theme for their own amusement. Then the terrible tragedy of the Kent State shootings happened. Four of their classmates were killed by those who were supposed to be protecting them. Suddenly the de-evolution of man and of society in general seemed more than just a joke. The band Devo was born.

Devo came into existence just at the right time; when punk rock started to roll. A growing number of starving music fans were craving a little subversion after being fed a steady diet of corporate rock for many years. Devo’s anti-establishment message was the sustenance needed to satisfy a new generation of musicians breaking out of the classic rock mold. No doubt there was some confusion about a band adorned in yellow jumpsuits, twitching like malfunctioning human robots, shouting out lyrics about their paranoias. But when the listener got it, it all made sense. This was a band protesting a power in society that wanted to homogenize the human condition and bring it down to its most infantile stage (personified by Booji Boy) so that it could be controlled much like a patch of potatoes. Fine for some, but for the more artistic and creative among us, this suppression brings out those “uncontrollable urges,” exemplified by the band’s astonishing stage shows that have been going strong for over three decades.

Devo’s classic line-up includes the brothers Mothersbaugh (Mark and Bob 1) and Casale (Gerald and Bob 2) and Alan Myers. The band’s classic first album Q: Are We Not Men? A: We Are Devo!, produced by Brian Eno, gained national attention after their appearance on Saturday Night Live in 1978, featuring frenetic performances of “(I Can’t Get No) Satisfaction” and “Jocko Homo” and a few mind-blowing clips from their surrealistic film The Complete Truth About De-Evolution. The band hit their commercial peak in the early ‘80s with the top 40 “Whip It” from their third album Freedom of Choice. The video garnered heavy rotation on the fledgling MTV. Devo’s futuristic sci-fi look was essential to their appeal, and new attire would accompany each album debut. Their signature energy dome hats and worker coveralls became a staple for them and for their fans.

With musical success came other opportunities for the band, most notably for Mark Mothersbaugh; he began a successful music studio and production company and has been involved with movies (several Wes Anderson soundtracks, among others), video games, cartoons, and some great children’s programming (Pee Wee’s Playhouse, Rugrats, Yo Gabba Gabba). After an extended time with little new music from the mid-‘90s to the mid-‘00s, Devo began recording again in 2007 and released a strong album Something for Everybody in 2010, bolstered by appearances at the 2010 Winter Olympics in Vancouver and subsequent touring. Sadly, former drummer Alan Myers died of cancer in 2013, and last month longtime member and original guitarist / keyboardist Bob2 (Bob Casale) died of heart failure.

A Devo cover is truly something unique. They certainly don’t back down from huge songs known to most in a definitive version. They take that song and transform it to a style that is immediately recognizable and is all their own. Their mutated method of asynchronous rhythms, heavy electronic pop, and shout-out lyrics has influenced many a band. But nothing comes close to the original. For the Spudboys and Spudgirls and all other DEVOtees everywhere, these songs are a critical reminder to us all that the process of de-evolution must be televised!

Devo – (I Can’t Get No) Satisfaction (Rolling Stones cover)

Here’s a recipe for disaster: on your first album, record a cover of one of the most recognized singles in rock history by one of the all-time great bands. Now, instead of paying homage to the Rolling Stones, totally deconstruct the song, remove the soul, speed it up, add crazy time signatures, and shout the lyrics instead of singing. Amazingly, “(I Can’t Get No) Satisfaction” takes on a whole new meaning with Devo’s style and fits in perfectly with their philosophy of societal angst. Bottom line: one of the greatest covers ever created by any rock band, period.

From Duty Now for the Future comes “Secret Agent Man,” a perfect Devo reworking of the Johnny Rivers classic. The synthesizer plays a more prominent role, as Devo songs in general become more based on ones and zeros through their early albums.

A Devo take on Jimi Hendrix’s “Are You Experienced”? Why not? Just go with a little less guitar, a little more electronica, add a driving rhythm, and substitute “mutated” for “stoned.”

Devo – Working in the Coal Mine (Lee Dorsey cover)

Society wants us to be happy about working in the coal mine. No worries about black lung, long hours, and back-breaking work. So let’s make an upbeat, danceable tune about it. This great Devo remake of the bluesy Lee Dorsey original went on to be featured in the movie Heavy Metal and, more troublingly, in the Dane Cook vehicle Employee of the Month.

“Head Like a Hole,” the opening track from Pretty Hate Machine, was the world’s introduction to Nine Inch Nails. In Devo’s hands, it was the song that played during Jackie Chan’s Supercop. No bowing down to the one you serve here. Spuds unite!

“Ohio” is somber as it gets for Devo. This stark cover of the Crosby, Stills, Nash, and Young classic about the Kent State shootings takes on a whole new meaning when you understand the history of the band.

Devo can be found on iTunes, Amazon, and at Club Devo.

5 Responses to “In the Spotlight: Devo”