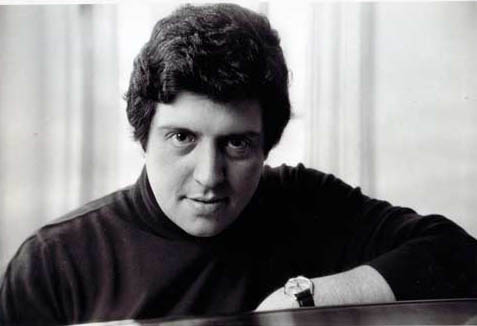 Yes, Raposo’s songs helped many a sunny day sweep the clouds away, whether they were performed by Cookie Monster or Frank Sinatra (who called Raposo “the genius”). His melodies were catchy and uplifting, while his lyrics were simple enough for kids to grasp, but sophisticated enough that adults could find true meaning in them. Put together, they defied you to not sing along.

Today we celebrate Joe Raposo’s memory with these covers that could have been maudlin in the wrong hands, but come across as old friends.

“Sing” was Raposo’s biggest chart hit, in the form of the Carpenters’ Grammy-nominated cover, and its simplicity has helped it become an iconic Sesame Street song, performed worldwide in any number of languages (Lily Tomlin’s seen performing it in sign language in the movie Nashville). Pink Martini’s cover is performed in English and Spanish; in fact, the Spanish is handled by Emilio Delgado, who plays Fix-It Shop owner Luis on Sesame Street.

Pat Collins, Raposo’s wife, revealed that “Somebody Come And Play” has its roots in Raposo’s childhood, when his parents literally nailed the windows shut so he would keep practicing the piano and not sneak out to play baseball with the other neighborhood boys. It’s a sad story, but leave it to Raposo to make a ray of sunshine out of it, and the BMX Bandits do a nice job at keeping the beam alive.

Ferdz Inez is a YouTube cover artist, with an impressive back catalog worth exploring if you like what he does with “Everybody Sleeps.” And why wouldn’t you like it? It’s done with affection and charm, and the flute of the original isn’t even missed.

Sue Raney – There Used to Be a Ballpark (Joe Raposo cover)

When Sinatra was preparing his comeback album Ol’ Blue Eyes Is Back in 1973, he said he wanted it to be all Raposo songs; the record company talked him down to four. One of them, “There Used to Be a Ballpark,” was about the Polo Grounds on the surface, but deeper listening revealed it to be a telling metaphor for loss of youth and innocence. Sue Raney, a longtime jazz singer who recorded rarely but too well, steers clear of schmaltzy sentiment and nails both the sadness for what’s gone and the appreciation for what happened.

“Bein’ Green” is Kermit the Frog’s signature song, and the argument could be made that it’s Raposo’s as well. It’s attracted a lot of A-list covers, from the likes of Ray Charles, Diana Ross, and Van Morrison, to name but a few. One of the most impressive – because most unlikely – comes from Buddy Rich, world’s greatest drummer, on his 1972 album Stick It. No big-band instrumental here; rather, Rich sings with warmth and sincerity, accompanied by guitarist Walt Namuth and nobody else. A lifelong friend said “Bein’ Green” was Rich’s favorite song, and while that may not square with his mercurial reputation, it’s certainly borne out by this performance.


Raposo wrote other TV themes besides Sesame Street – among them were the themes to The Electric Company, Shining Time Station, and Three’s Company. Here’s America’s loungeaholic, Richard Cheese, adding his Vegas schmoozetastic touch to the latter, complete with slurring through the bridge that nobody ever remembers.

One Response to “In Memoriam: Joe Raposo”