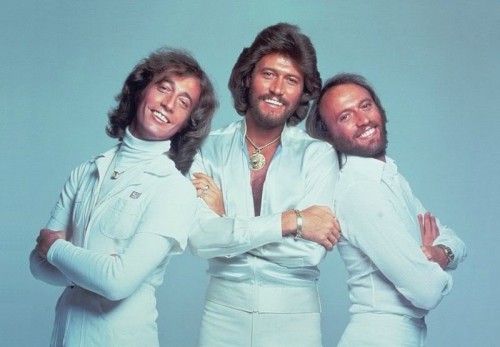 But for all the venom directed “Stayin’ Alive”‘s way, for all its use as a punchline from Airplane! to Ted, people can’t get away from how good a song it is. “Look at great huge Maurice Gibb, singing like Donald Duck on ‘Stayin’ Alive,'” Roger Daltrey of the Who carped in 1978, then instantly added, “And that’s a great song. Bruce Springsteen could sing that lyric.”

From Ozzy Osbourne to Tiny Tim, artists across the spectrum have furtively approached the monolithic masterwork that is “Stayin’ Alive” and made off with a small piece of it, to burnish and shape into a jewel of their own. Here are five of those jewels.

Dave Brewer strips down “Stayin’ Alive” and mashes it up with LL Cool J’s “Phenomenon,” resulting in a Reese’s Peanut Butter Cup of a cover. With some ace acoustic work, some looping pedals, and a cool gruff vocal, his creation is impressive enough; to learn that this was recorded live in one take is to expand the appreciation tenfold.

Electro Deluxe are a French jazz-funk-soul quintet, which automatically gives them more layers of sweet coolness than you’ll find in a mille-feuille. That also gives them a head start in making “Stayin’ Alive” sound hip enough to make you retournez votre couvercle. Oh, and Google Translate is très bon for write-ups like this.

Eldissa’s 2005 album What a Difference was aptly titled; it gave a batch of disco hits the acoustic bossa lounge treatment, turning them from dance floor fillers to candlelit dinner accompaniment. “Stayin’ Alive” was the lead-off track, and when it came to giving an indication of what was to come, it certainly did the trick.

If it’s atmosphere you want, check out this description of Live in the Alleyway Behind the Elna Rae House by French Quarter, a.k.a. neofolkie Stephen Steinbrink: “Recorded to James Fella’s hand-held tape recorder, held in Jasmin Hunter’s hand, on May 30, 2006 in a late-night alley performance behind the ‘Death To Elma Rae House’ party, a goodbye celebration also featuring sunroom thrash & a kitchen skiffle singalong. Everybody moved out the next day, some very far away.” The “Stayin’ Alive” cover is equally atmospheric, loaded with somewhere-a-dog-barked ambience, beer fumes, and moments where the audience is better recorded than the musician. You can picture in your mind’s eye the young couple making out to it under the fire escape. It’s almost incidental how good the cover is.

The original “Stayin’ Alive” is available on iTunes and Amazon; if you need a quicker fix, it’s also on YouTube.