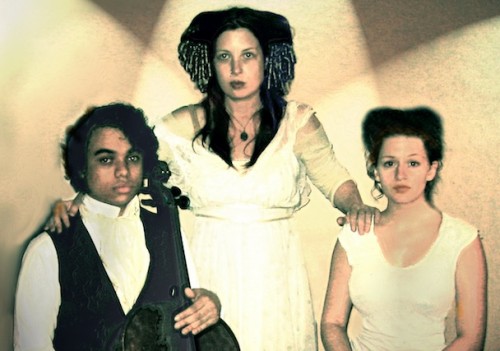 Rasputina are number one in a field of one (unless you know of other steampunk cellist trios), but the territory they carved out for themselves has proven to be a touchstone for any artists who want to marry goth to chamber-pop. Melora Creager is the band’s sole constant, and she and her compatriots have been donning Victorian duds and partying like it’s 1799 for over two decades now.

Creager’s original songs have been rightly praised, but listeners who want to hear something more familiar will flip for Rasputina’s covers. And with results like these, who can blame them?

We featured Rasputina’s studio cover of “Rock and Roll” some time ago, on our Full Cover Album for Led Zeppelin IV, so here’s a live version that rocks harder than expected, to the audience’s audible glee.

Melanie’s biggest hit “Brand New Key” combined a naive melody with paging-Doctor-Freud lyrics and came across as a celebration of budding sexuality, even if that’s not what Melanie intended when she wrote it. Rasputina’s cover has richer, busier instrumentation, giving the song a brand new texture that provides weight where there really shouldn’t be any.

Rasputina – You Don’t Own Me (Lesley Gore cover)

Lesley Gore’s “You Don’t Own Me” was a declaration of autonomy that, over the years, became a feminist anthem. Rasputina’s take has a somewhat different way of building up the tension – Creager doesn’t let her voice soar to break the ties that bind the way Gore’s does; rather, she allows the music to skitter and swirl around her, eventually swelling to such a degree that the moment it comes to a halt is discombobulating.

Rasputina – I Go to Sleep (The Kinks / The Pretenders cover)

The Kinks never recorded Ray Davies’ “I Go to Sleep” (though his demo would eventually be a bonus track on Kinda Kinks); it took Chrissie Hynde to bring it into the top ten with the Pretenders’ cover. Listening to Rasputina’s version, one would think the song was written for multiple cellos to groan and ache along with the singer.

John Fogerty could take the book of Revelation and turn it into a good time chooglin’ – in fact, in CCR’s “Bad Moon Rising,” that’s exactly what he did. You have to pay close attention to the lyrics to recognize the impending dread that the song’s all about. Not so with Rasputina’s cover; the only things that spells DOOM louder than the music are the one-second moments of silence peppered throughout the song. Everything that follows those pauses sounds more dire than what came before, and by the end of the song you’re almost crying with relief that the apprehension can finally dissipate.

For more information, stop by www.rasputina.com.