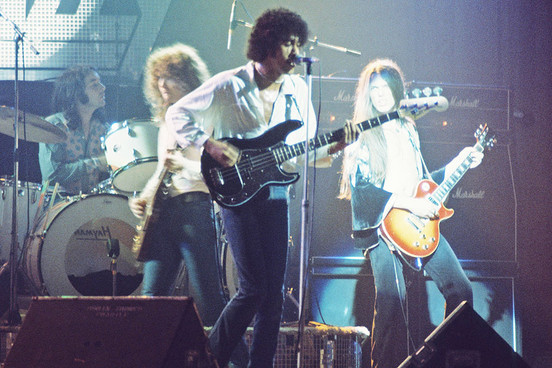 It was twenty-eight years ago this month that Phil Lynott, bassist/vocalist for Thin Lizzy, passed away far too young. At least he left behind a legacy – a quality back catalog, a memorable description from Henry Rollins as “my guardo camino… the man that gets me through the high times, the low times and all the times in between,” and a song that rivals “Jersey Girl” as the best Bruce Springsteen song that Springsteen never wrote – “The Boys Are Back In Town,” from 1976’s Jailbreak.

This is a song that featured twin lead guitars and Lynott’s tough poetry, expressing the bros-before-hoes mentality a good thirty years before that expression came to be, yet in a way that was clean enough that Disney could feature it in Toy Story trailers without anyone taking offense. It was the kind of song that meant a lot to both fans and peers, as well as those fans who would have been peers as they grew up and became artists themselves. Here are five of those fans…

The Cardigans – The Boys Are Back In Town (Thin Lizzy cover)

The Cardigans give “The Boys Are Back In Town” the samba treatment, and if you think a Swedish band giving an Irish band a Brazilian sound is a little out of this world, you’re not necessarily wrong. But then, whatever world they’re on has some beautiful music in it, and even if you could never have pictured this child coming from these parents, the Cardigans deserve congratulations for bringing this bundle of joy into being.

John Darnielle, the mover and shaker behind the Mountain Goats, performed this cover of “The Boys Are Back In Town” on VPRO Radio in the Netherlands, tossing in a little “Ignition” from R. Kelly at the end. It’s less exuberant than Thin Lizzy’s, more introspective, which changes the feel of the song so the introverts can enjoy it the same way the extroverts enjoy the original.

Happy Mondays – The Boys Are Back In Town (Thin Lizzy cover)

Shaun Ryder leads those wild-eyed boys in a rave-up of “The Boys Are Back In Town,” and the song’s lyrics fit the Madchester sound as perfectly as baggy clothing can fit under the circumstances.

Sofia – The Boys Are Back In Town (Thin Lizzy cover)

This cover comes from a 2008 album by Sofia titled Search & Destroy: A Punk Lounge Experience, and features the usual punk suspects (Sex Pistols, Clash, Ramones, et al) getting their songs cooled down and chilled out. Whether this leaves you feeling shaken or stirred, you have to admire the way “The Boys Are Back In Town” can sound perfectly at home in yet another new setting, making an entrance with a glide in its stride and not a tumble in its stumble.

Belle & Sebastian – The Boys Are Back In Town (Thin Lizzy cover)

Anybody who ever bought into Jack Black’s description of Belle and Sebastian as “sad bastard music” in High Fidelity is going to be knocked for a loop by this live cover. In front of a thoroughly surprised crowd, they blow through a note-for-note “The Boys Are Back In Town” with an intensity nobody who knew them for “Seymour Stein” would have ever thought existed.

Thin Lizzy’s classic original can be found on iTunes and Amazon.

2 Responses to “Five Good Covers: The Boys Are Back In Town (Thin Lizzy)”