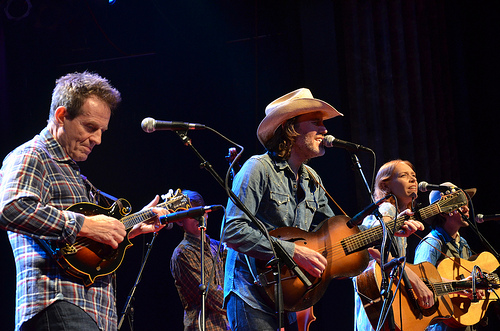 Dave Rawlings, perhaps best known as Gillian Welch’s right hand man, assembled his Dave Rawlings Machine for a seven-city mini-tour last November. The tour got lots of buzz, with much attention directed to the group’s cover of Led Zeppelin’s “Going to California.” With original Zeppelin member John Paul Jones playing mandolin for Dave Rawlings Machine, their version has an inside track for authenticity. Interweaving guitars and mandolin reference the original; the harmonious vocals are, as one might guess, somewhat more restrained than Robert Plant’s on the 1971 version.

Dave Rawlings Machine also includes Gillian Welch, Willie Watson and Paul Kowert. YouTube videos that showed up immediately after the tour dates were marred by crowd noise and some uneven performances. Fortunately, the band took time to gather around a single microphone backstage at the Georgia Theatre in Athens, Georgia, to film the version below.

Get the latest news for Dave Rawlings Machine at their website.