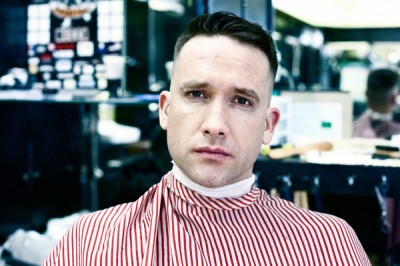 Nina Simone was a bold and original artist. She drew on jazz, gospel and popular music influences, developing a distinctive style and singing voice. Beginning in the late 1950s, Simone released a series of successful albums, but stayed indifferent to the music industry. Her songs were often political, addressing civil rights and feminist issues.

“You’d Be So Nice” is actually a cover of a cover. Simone released “You’d Be So Nice to Come Home To,” a Cole Porter song, on the Nina Simone at Newport album in 1960. Xiu Xiu’s version is as distinctive now as hers was then. Saxophone and drums kick off the song with little reference to the melody. A bass line and a second sax enter, contributing to a controlled frenzy. Quavering vocals enter for a verse after almost three minutes.

The minimalist video for the track features a well-dressed Jamie Stewart in front of of a colorful backdrop of coral. Somewhere, Cole Porter is watching and listening with a puzzled grin.

For more on Xiu Xiu, vist their website.
Cover Me is now on Patreon! If you love cover songs, we hope you will consider supporting us there with a small monthly subscription. There are a bunch of exclusive perks only for patrons: playlists, newsletters, downloads, discussions, polls - hell, tell us what song you would like to hear covered and we will make it happen. Learn more at Patreon.