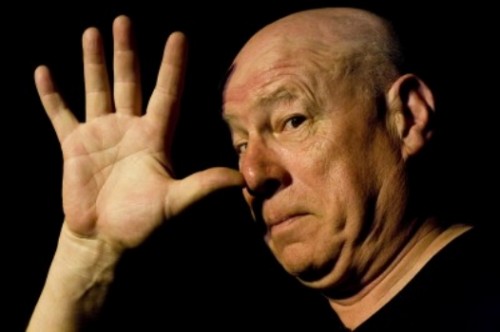 Neil Innes turns 69 today. For more than forty years he has been acclaimed as a songwriter, musician, and performer, acclaimed by allmusic.com as “the most important figure in British musical comedy since the heyday of vaudeville.” He’s been on both sides of a plagiarism lawsuit – he has to credit John Lennon and Paul McCartney as co-writers of Rutles songs, while the Oasis song “Whatever” is now required by law to credit Innes due to lifting the opening of his “How Sweet To Be an Idiot.” So Innes has talent to burn and no-such-thing-as-bad-publicity to boot, but in the United States he remains relatively unknown. For all his accomplishments, Innes may be one of those whose peculiar talents simply aren’t appreciated as much on this side of the Atlantic. This is best described as “America’s loss.”

While in art school, Innes joined forces with a group of odd, diverse musicians who called themselves the Bonzo Dog Dada Band, later revised to the Bonzo Dog Doo Dah Band. Initially playing a mix of traditional jazz and music hall music, always with a bit of a humorous edge, they would later turn more toward rock, which led to them catching the Beatles‘ eye and appearing in their Magical Mystery Tour movie. The Bonzos’ first album, Gorilla, was in many ways a parody of their trad-jazz past, and showcased their twisted sense of humor, often compared to the early Mothers of Invention. This was followed by their first hit, the Innes-written “I’m the Urban Spaceman,” produced by Apollo C. Vermouth (a.k.a. Paul McCartney). Two more albums of increasingly quirky music followed before the band broke up (although there have been some reunions).

In the 1970s, Innes began to work with the Monty Python troupe. He wrote songs for the Flying Circus, appeared in the show, and contributed to their live stage shows and films, to the point that he was known as “the seventh Python.”

In addition, Innes and Eric Idle collaborated on a TV show called Rutland Weekend Television, sort of an English SCTV. One of Innes’ most memorable appearance on the show featured him performing his hilarious Bob Dylan parody, called, simply, “Protest Song” (“I’ve suffered for my music, and now it’s your turn”). Another sketch on that show introduced the Rutles, who performed Innes-written songs that sounded remarkably Beatlesque. When Idle replayed this bit on Saturday Night Live, Lorne Michaels suggested lengthening the skit, leading to All You Need is Cash, a mock-rock-doc released years before Spinal Tap was a gleam in Christopher Guest’s eye. Innes played the John Lennon figure Ron Nasty; a heavily disguised George Harrison had a cameo as a reporter.

After Rutlemania died down, Innes returned to the BBC with a show called The Innes Book of Records; later he turned to children’s television and music. He still does occasional tours and one-off performances, sometimes with various members of Monty Python or the Bonzos, and makes the odd (in every sense of the word) appearance on television.

Let’s take a look at the career of Neil Innes, through some covers that only scratch the surface of his brilliance.

From the Bonzos’ debut album Gorilla, this is a deliberately awful version of the Tony Bennett standard “I Left My Heart in San Francisco,” featuring Innes’s loungey piano. Not nearly as painful as their cover of “The Sound of Music,” this song showed the band’s talent for music was often overshadowed by their desire to amuse, or even shock.

It would have been nice to find a cover of “Death Cab for Cutie,” by the band that took the song title for their name, but it was not to be. This doo-wop ditty was performed by the Bonzos in Magical Mystery Tour, and here is performed in a sloppy, more Elvis-influenced style by a likely drug-impaired Alex Chilton, live on Memphis radio in 1975.

“The Intro and the Outro,” also from Gorilla, is a piece in which the band vamped behind leader Vivian Stanshall’s smarmy introduction of the members, without ever actually playing a song. The dry humor here is nearly irresistible. Stanshall starts off accurately identifying the members, including Innes on piano, before veering off into fantasyland, announcing John Wayne on xylophone, Princess Anne on sousaphone, Adolf Hitler on vibes (“looking very relaxed”), the entire Count Basie Orchestra on triangle, and many more. (Eric Clapton, who is introduced as the ukulele player, is, in fact, on the recording.) Don Sebastiano, an Arsenal supporter, released this parody of the Bonzo song, honoring the North London team’s great manager and replacing the musicians with current and former team players, including Thierry Henry on drums and Cesc Fabregas on bongos.

A bonus track added to the band’s second album, The Doughnut in Granny’s Greenhouse (released in the U.S. as Urban Spaceman), this is a raucous, fun, and almost straightforward version of the Carl Perkins rockabilly classic, with Innes pounding away on the piano.

Innes’ fame, at least in America, is pretty much directly tied to his involvement with the Pythons, with whom he clearly shared an anarchic sense of humor. He wrote a number of songs that were used in the weekly series, and most of the music for the troupe’s magnum opus, Monty Python and the Holy Grail. Innes also also played a few parts in the movie, most memorably the head of the chanting monks, who smash their heads with their prayer books, and Sir Robin’s minstrel, who refused to sugarcoat his master’s cowardice (and who was later eaten, to much rejoicing). This cover by guitarist/multi-instrumentalist The Human Tim, a self-described “nerdcore rocker” from Connecticut, includes the wonderful “Knights of the Round Table” and “Sir Robin” songs, both with music written by Innes, and “Always Look on the Bright Side of Life,” from Monty Python’s Life of Brian. Eric Idle wrote that last one, but it was Innes who suggested the whistling.

The songs that Innes wrote for the Rutles were uncanny in their ability to evoke the various styles of the Beatles without, for the most part, being direct parodies of particular songs. Nevertheless, it is pretty clear that “Cheese and Onions” owes a great deal to “A Day in the Life” – so much so that Innes agreed to share publishing credit (and royalties) with Lennon and McCartney. This Galaxie 500 cover appears on Rutles Highway Revisited, a 1990 tribute album on the Shimmy Disc Records label. That a tribute album to a fake parody band exists is either genius or demonstrates that some people just have too much time on their hands. Same goes for tribute bands to fake parody bands (we’re looking at you, Ouch! from Austin, Texas).

Learn more about the zany world of Neil Innes on his website.