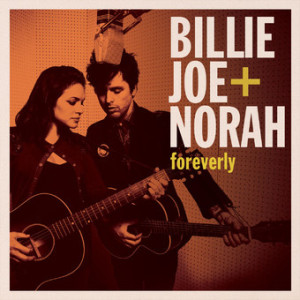 The resulting album, punningly titled Foreverly, is a song-by-song (in a slightly modified order) rerecording of the Everlys’ classic album, and a potential introduction of the Everly Brothers to a whole new audience. There’s also the possibility that it introduces a whole new audience to Norah Jones. Or Billie Joe Armstrong. Who knows, but there’s a good chance that the number of people who are big fans of all three are few and far between (and likely thrilled).

Thankfully, all parties involved come away looking pretty good. Armstrong and Jones follow the general approach the Everly Brothers set up with their singing, which is probably what really makes this an Everly Brothers cover album. Songs Our Daddy Taught Us was the Everlys’ interpretation, so Foreverly is approached through their version. And it’s faithful to those songs, but adds enough of a twist to give it value of its own.

For one thing, while Armstrong and Jones are singing lovely harmony, it’s quite a departure from the sweet, brotherly harmonies that the original album possessed. The gruffness of Armstrong’s voice is smoothed out by Jones’ sweetness. The guy/girl dichotomy is a nice change of pace for these songs, bringing a different emotional weight to the songs. But that’s a difference a listener could guess was coming even before putting the album on. The Jones lead vocal on “I’m Here To Get My Baby Out Of Jail” gives the songs lyrics a little more credence (why would two guys be saying that?). Armstrong has his turn on “Barbara Allen,” which actually takes on more of the original Scottish/Celtic sound than the Everlys gave it.

More interestingly, many of the songs are fleshed out beyond the basic guitar/voice template that the original album stuck to. A fantastic decision, providing variety where the original album had consistency. The first few moments of the leadoff track, “Roving Gambler,” sounds exactly like the original, but by the end of the song, bass, drums, and harmonica have made appearances. It’s reverent without being bound to the past.

Now it’s time to wait and see what kind of an impact this album makes. Will Green Day fans start listening to the sweet harmonies of the Everlys? Will Norah Jones fans start lining up for American Idiot? Will Everly Brothers fans even realize this album exists?

Regardless, the album is a winner. A showcase of genuine love and creativity, a couple times over. The songs covered weren’t originally Everly Brothers songs, but that is how Armstrong originally heard them, and that’s how he’s paying tribute to them. And it’s a tribute worthy of the name Foreverly.