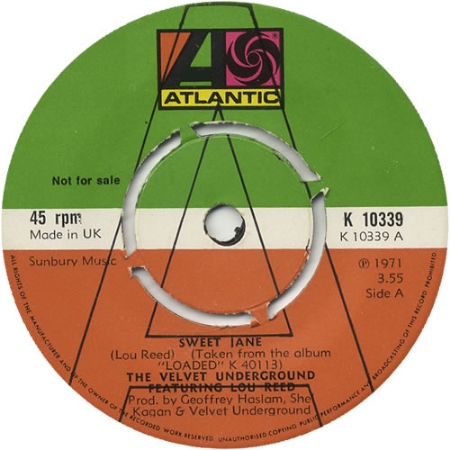 “Sweet Jane” is a great song. Released on 1970’s Loaded, the Velvet Underground’s last studio album featuring Lou Reed, it immediately became a staple of FM radio, despite its odd and provocative lyrics, unusual structure, and unconventional sound, and it continues to get airplay to this day. What’s the appeal? Part of it, of course, is the riff (which apparently includes a “secret chord”), part of it is the indescribable cool of Reed’s delivery, and part of it is that magic that makes some songs great and others not so much. According to Rolling Stone, it is the 335th greatest song of all time, which is curiously specific. And now, in honor of Reed’s passing earlier this week at the age of 71, the time has come to write about it here on Cover Me.

It should come as no surprise that “Sweet Jane” is also an oft-covered song – any bar band could play those three chords, and most of them did and do. Probably the most famous version was released by the Cowboy Junkies; based on a live version by the Velvets from 1969, it hit #5 on the Billboard Modern Rock charts, and Reed himself allegedly called it “the best and most authentic version I have ever heard.” Of course, artists don’t always properly appreciate their own music, and to these ears, the Cowboy Junkies turn the song into a lugubrious snoozefest. So we will not be presenting that cover – nor, for that matter, will you hear any of the various versions based around that cover. Not when there are so many more little-known treasures out there.

The story of how Mott the Hoople was about to disband when David Bowie convinced them to give it another go is pretty well known. Bowie handed them “All The Young Dudes” (after the band rejected “Suffragette City,” and Bowie denied them “Drive-In Saturday”) and produced their album, and instead of breaking up, the band became famous. Bowie also suggested that they cover “Sweet Jane,” because of his admiration for Reed. Ian Hunter, Mott the Hoople’s vocalist, did not share this admiration — he thought that the Velvet Underground “stunk,” and didn’t get along with Reed – but they recorded the song anyway, even though Hunter has been quoted as saying “it wasn’t us.” Their version is a somewhat cleaner, more straightforward rock version of the song, made better (as is anything in the world) with more cowbell.

As a bonus, here is a recording from the All The Young Dudes recording sessions (produced by Bowie, while also co-producing Reed’s Transformer), with Reed singing a guide vocal. It joins the Hoople approach to the Reed vocals and makes for an interesting comparison to the Hunter-led version.

Reed continued to perform “Sweet Jane” after he left the Velvet Underground and embarked on his solo career. However, after the disappointing commercial response to his depressing Berlin album, Reed decided to release Rock ‘n’ Roll Animal, a live album featuring his touring band, most of whom were more influenced by hard rock than the moodier Velvet Underground sound. The live version of “Sweet Jane,” especially the introduction showcasing the interplay between guitarists Steve Hunter and Dick Wagner (who both also played with Alice Cooper… and Peter Gabriel) is thrilling. This cover, recorded at the end of last August on a boat circling Manhattan, features Grateful Dead bassist Phil Lesh and a band that includes his sons Grahame and Brian; they do a nice job recreating the Rock ‘n’ Roll Animal version, but somehow add a definite Dead twist.

The influence of the Velvet Underground on punk music has long been recognized, and it didn’t take long for punk bands to latch on to “Sweet Jane.” Eater, an early English punk band made up of teenagers of limited musical talent but limitless enthusiasm, released this loud, fast version on their debut album in 1978. In 1980, Gang of Four performed a metallic version of the song live, at a gig in San Francisco. A few years later, the American hardcore band Hüsker Dü played this cover of “Sweet Jane” live, in their trademark buzz saw style.

Lone Justice were a next-big-thing that never really happened back in the 1980s. A country-rock band fronted by the big-voiced Maria McKee, their live performances and debut album received rave reviews from critics, but their sound – too country for rock, too rock for country – didn’t connect with the music-buying public of the day. Bono, however, was a fan, and Lone Justice opened for U2 for a couple of years. A country-tinged cover of “Sweet Jane” (which McKee called her favorite rock song) was a regular part of Lone Justice’s set list, and sometimes Bono would come out and join in. Annoyingly, in this recording, Bono indulged his habit of adding his own self-referencing lyrics, which do not improve on Reed’s brilliance, but his voice does ultimately add to the performance.

This curiously effective version of “Sweet Jane” melds it with Joan Armatrading’s very different “Love and Affection.” 2 Nice Girls, a self-identified “dyke rock” band from Austin, accomplished this alchemy by slowing down “Sweet Jane” (but without the infuriating ennui of the Cowboy Junkies version) and intermixing the song by the underrated Armatrading in a way that is surprisingly natural. According to the band, as their debut record (containing this version of the song) was being pressed, the Cowboy Junkies’ “mellowed out, slowed down and sung by a woman version of Sweet Jane came out…. It became a hit and we were scooped.” To be fair, the fact that the Cowboy Junkies’ album was on a major label probably didn’t hurt, either. And if it was any consolation – which it undoubtedly was – Reed reportedly liked this version too.

Check out the fully Loaded version on iTunes and Amazon.