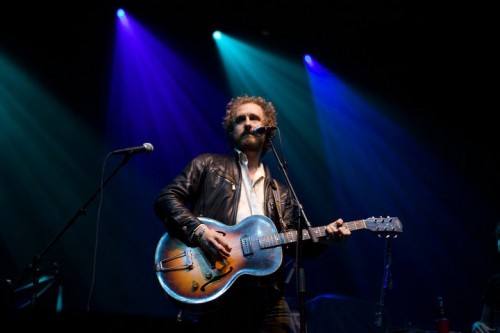 There’s a certain quality to some pop songs that gives them this feel of being something else entirely. You can hear it in the sound, a sound bestowed with measured calm and enormous passion that gives the sense of the song being sung a million times before. You can hear it in the lyrics, veering toward the biblical but never going all the way there and always feeling like a product of their time rather than like something plucked from bygone centuries.

The quality can best be described as reverence, and it’s a difficult art to convey in a cover. The most established example is inarguably Leonard Cohen’s “Hallelujah,” and in the myriad covers of that song (though many succeed) we can feel it in our hearts when they fall short.

All of this is distilled in Phosphorescent’s quietly stunning cover of Vampire Weekend‘s “Ya Hey.” Despite being moderately subdued by Vampire Weekend standards, the original is a deeply layered and artfully produced track. By contrast, Phosphorescent’s Matthew Houck brings only his vocals (and occasional backing female vocals), light strums and plucks of the guitar, and the quiet chime of a piano.

The cover, for lack of a better descriptor, sounds like a holiday song (in the best way possible). It sounds like one of those alt-country or indie holiday songs that make you forget that you’d ever heard the song before, let alone thousands of times, and the familiarity it evokes is one not just of the music but of feeling and of the deep sense of being somehow at home wherever you are. Better yet, it feels like one of those moments when someone takes to the piano or the guitar in the orange glow of revelry, when a hush falls over the room despite nobody being told to quiet down, and everyone remembers why they’re together with these disparate people in the first place. That’s the kind of track this is, and it’s not to be missed.