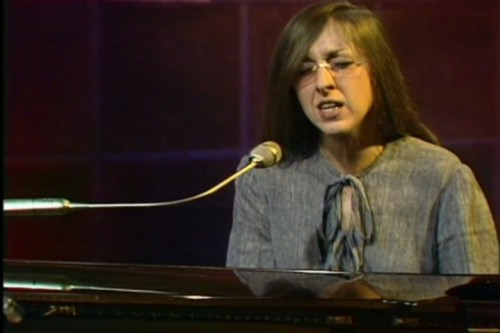 Admit it – you want to know more.

Sill was extraordinarily gifted, writing songs suffused with the glory of God in a way that mashed to dust the work of the Laurel Canyon residents of the seventies. But the style that she called “country-cult-baroque” took many years to find its audience, and she didn’t survive to see her work rise from her ashes. Still, the work remains, and has moved others to offer their interpretations of what she brought to the world. Today we remember her, on what would have been her 69th birthday, by presenting a few of these interpretations.

Warren Zevon was at a low point when he recorded 1995’s Mutineer, and the uninspired album led his label to drop him; he didn’t release another album for five years. But he did have it in him to record an abbreviated version of “Jesus Was A Cross Maker,” Sill’s best known song (also covered by the Hollies and Mama Cass). It’s a fine recording, and if it brought Sill’s work to people who never would have heard it otherwise, all the better.

“It was streetwise and yet it was religious,” Shawn Colvin said of Sill’s work. Her cover of “There’s a Rugged Road” appeared on 1994’s Cover Girl album, back when Sill’s work was out of print and mostly undiscovered. Kudos to Colvin for getting there early and bringing Sill to an audience that didn’t know how much it needed to know her work.

Ex-Posie Ken Stringfellow recorded an all-cover EP in 2008 titled The Sellout Cover Session Volume 1. The title couldn’t have been more ironic; Stringfellow’s selections were so little known (heard any Long Winters songs lately? Hummed any Bill Fay?) that he couldn’t have sold out a tool shed based on their fame. Fortunately, he had his talent and the talent of the songwriters, and we’re all grateful for his bringing Sill’s “Crayon Angels” to the, er, masses.

Last week we promised one more cover was coming from Tara Jane O’Neil, and here it is. Her cover of “The Phoenix” survives the thousand-mile journey from Laurel Canyon to Portlandia none the worse for wear, perhaps trading in a coat of dust for a coat of dew.

If Andy Partridge’s praise in that opening paragraph wasn’t effusive enough for you, try this on for size – he called “The Kiss” “the most beautiful song ever recorded.” He may not be wrong – judge for yourself. Marissa Nadler knows better than to try matching Sill’s song; she’s content to add her own trip-hoppy spin, with the assistance of Black Hole Infinity. This recording comes from Crayon Angel: A Tribute To The Music of Judee Sill, with fifteen tracks that at times are almost as revelatory as Sill herself.

Judee Sill’s work can (and should) be picked up at iTunes or Amazon.