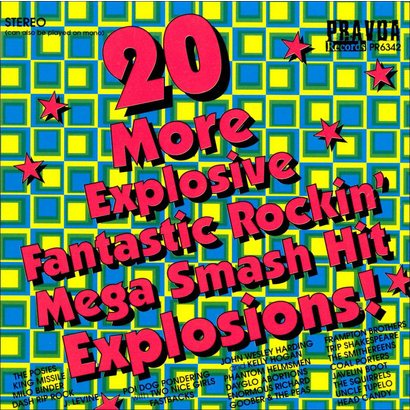 You kids today, with your Now That’s What I Call Music compilations – you don’t know how different it was back in the day. When K-Tel was in their ’70s prime, their ubiquitous commercials made them the “As Seen On TV” company and served to get the words and music on the street. They fit twenty or so songs on one album, making for tinny sound and many songs edited for single length. Not all the songs on them were hits; you bought them for the big names and sat through the one-hit wonders, novelties, and other filler. But for only $5.99 (8-track or cassette only $7.99!), you could get a wide-ranging look at a year in music, complete with packaging ugly as a burnt-orange couch, and somehow the experience wouldn’t have been the same if the treasures hadn’t been mixed in with the trash.

Pravda Records, an indie label in the Midwest, spent the first half of the ’90s putting together a three-volume tribute to K-Tel records. They asked the bands to cover the original hits of the original artists that crammed the platters that (sorta) matter, and wound up with 59 responses, all told. Some of them treated the whole thing as a gag, upping the cheese/irony meter considerably but predictably (exception: the Squirrels’ inspired medley “Seasons in the Sun / The Hustle”). Some followed the original so closely as to make it seem like that was the point of the exercise, e.g. the Smithereens’ note-for-note cover of Ringo’s “It Don’t Come Easy.” A few of them were able to put their own stamp of originality on it, like the Smashing Pumpkins’ take on “Jackie Blue.” Put them altogether and whattaya got? Frankly, an uneven trio of albums – but seeing as how that suits the K-Tel aesthetic, that’s entirely appropriate.

The first album, 20 Explosive Dynamic Super Smash Hit Explosions!, featured this cover of “Shannon,” Henry Gross’s tribute to Beach Boy Carl Wilson’s late Irish setter. The Sinatras do it their way, tossing Gross’s falsetto into the background and turning the song into a power-pop ballad. Incidentally, Casey Kasem delivered his famous obscenity-laden rant just before sending out a Long Distance Dedication of the original “Shannon.”

R. Dean Taylor went top-five with “Indiana Wants Me,” the story of a misunderstood youth on the lam who misses his girl and ends up cornered by a barrage of sound effects. The Frampton Brothers cover takes away Taylor’s plaintive sound and gives the song a welcome edge. This comes from volume 2, 20 More Explosive Fantastic Rockin’ Mega Smash Hit Explosions!

ABBA were a regular find on K-Tel albums – just another step on the road to world domination, don’t you know. Milo Bender covers “Dancing Queen,” their sole number one hit from the Billboard Hot 100, and turns it into another kettle of lutefisk altogether. No disco beat, no shrieking harmonies – just an acoustic, a little bass harmonica, and one guy’s voice drawing a charcoal picture as he sees that girl and watches that scene.

By the third volume, it was evident that Pravda’s concept was running out of gas – for instance, the title of this one was simply Star Power!. Nevertheless, a few of the bands were still bringing the heat. One was the Silos, who took “Mama Told Me Not To Come” (written by Randy Newman, but known to the K-tel Krowd solely by Three Dog Night’s cover) and rock out to it in a whole new way.

Vicki Lawrence’s “The Night The Lights Went Out In Georgia” spun a Southern Gothic tale of murder and betrayal, and it ended with a Shyamalanesque twist. Well, one good Vic deserves another, and that’s what Lawrence got when Chesnutt covered the song, doubling down on the eerie and the doom.

You can get all three CDs at the Pravda Records website – and for cheaper than Amazon, too.