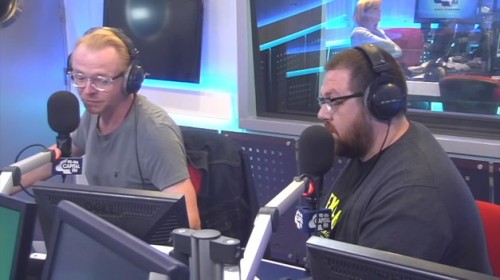 Edgar Wright’s “Cornetto Trilogy” – three films that celebrated ice cream and blood – has just been completed with the release of Wright’s latest, The World’s End. Wright, along with the stars of all three films (the first two being Shaun of the Dead and Hot Fuzz), Simon Pegg and Nick Frost, have been on a promotional binge for the last installment in the trilogy. While at 95.8 CapitolFM in London, Pegg and Frost delivered a very special rendition of Daft Punk‘s “Get Lucky.”

Pegg puts on his best radio voice and Frost adds rambling bloops and bleeps as the radio hosts and actors alike try not to break down in laughter. Despite being something of a “joke” cover, the comedic duo manages to capture a little bit of the swag that makes the original summer anthem so fun to begin with.

For more laughs and everything related to the Cornetto Trilogy, check out this official tumblr.