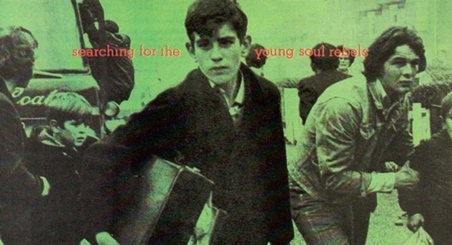 News flash: Dexys Midnight Runners are more than just “Come On Eileen.” However, Kevin Rowland’s adenoidal voice and over-the-top emotion are not for everyone. Not only that, Rowland’s behavior and strange decisions definitely hindered the band’s popularity. With that in mind, we embark on a defense of the band that released some great music during their brief (if recently revived) career. If you are a Dexys skeptic, or are unaware of their output beyond “Eileen” – and let’s face it, that’s most of the world – maybe this selection of their covers will convince you to dig a little deeper into their catalogue.

Dexys Midnight Runners was formed in 1978 in Birmingham, England, by singers and guitarists Kevin Rowland and Kevin Archer (who changed his name to “Al” to avoid confusion). They were devotees of Northern soul, a genre popular in Northern England at the time, which focused on American soul and R&B music — and, like so many music scenes, there seemed to be extra coolness points handed out for championing obscure gems. They named their band for Dexedrine, a popular type of amphetamine that allowed Northern soul lovers to have “midnight runners,” or energy to dance all night.

Rowland was obsessed with the band’s image, and in the early days, the members all wore typical workingman’s clothing, influenced by the great movie On The Waterfront. Their first single, “Dance Stance,” hit #40 on the U.K. charts, and the follow-up, “Geno,” a tribute to R&B singer Geno Washington (obscure in the U.S., revered in the U.K.), topped the charts in 1980. That year, the band released the breathtaking Searching for the Young Soul Rebels, an homage to the music they loved, seasoned with some political overtones. The album hit #6 on the U.K. charts, and got some overseas play. But the band had already begun making things difficult for themselves. They fought with their record label, which was already angry at them for stealing their album’s master tapes and extorting a higher royalty payout. They also antagonized the music press by refusing to give interviews. To complete the trifecta, Rowland’s autocratic ways alienated his bandmates, causing many of them to quit.

Undaunted, Rowland brought in some new musicians, changed the sound and look of the band to scruffy, rural, and Celtic, and together they recorded and released Too-Rye-Ay. Boom! “Come On Eileen” went to number 1 in the U.S., the U.K., and many other countries around the world. Too-Rye-Ay is also a very strong album, influential in unexpected ways – it is likely that the opening track/manifesto, “The Celtic Soul Brothers,” served as a key inspiration for the book/film The Commitments – but the rest of its music was overshadowed by the success of “Eileen” and the predictable anti-Dexys backlash that followed.

But success seemed to make Rowland even more difficult to work with, and more members of the band left. It was not until 1985 that a re-revamped Dexys released Don’t Stand Me Down. This time the former Celtic ragamuffins went corporate, wearing suits and ties.  The music had some strong moments, but too often indulged Rowland’s worst instincts. In yet another career-damaging move, the band refused to issue a single, until the record company forced the release of an edited version of the 12-minute-plus “This Is What She’s Like.” Both album and single sunk like a stone.

After that, Dexys disbanded. Rowland released two solo albums – one that received some critical praise and one of covers that decidedly did not — and both were commercial failures. Rowland also suffered from financial difficulties and drug problems during this period.

A few years ago, a newly reconstituted version of the band (now simply called “Dexys”) began to perform, and a new album, One Day I’m Going to Soar, was released in the U.K. last year, with an American release supposedly scheduled for later this month. The album, which received pretty good reviews, is a bit of a potpourri of styles, and like most of Dexys’ output it ranges from the brilliant to the self-indulgent. Will this lead to a resurgence or be another dead end? Based on history, the latter seems unfortunately more likely, but one can always hope.

Let’s take a look at their covers, most of which fall closer to the brilliant end of the spectrum.

In the middle of Dexys’ first album, containing original attempts to reimagine the Northern soul sound, they dropped in a raucous cover, “Seven Days Too Long” by Chuck Wood, a song that was, by some accounts, one of the most popular songs of the genre. And yet, it would be hard to have chosen a more obscure tune – it appears to have topped out at #119 on the Billboard charts in October 1967, and its singer, Chuck Wood, has left virtually no lasting impression. Which is too bad, because his version of the song is exhilarating, as is Dexys’ cover.

The somewhat cultish nature of the Dexys fanbase has resulted in the release of a number of expanded versions of their discography and collections of B-sides and live tracks, many of which were covers. This excellent cover of “Breakin’ Down the Walls of Heartbreak” was the B-side to “Geno,” and it rivals the Bandwagon’s obscure original gem. It was also covered by the unjustly obscure Bram Tchaikovsky about a year later, in more of a power-pop style.

Although you may not know who first released “The Horse,” if you have heard a marching band or pep band over the past quarter century, you will recognize this surprise hit for Cliff Nobles & Co. in 1968. Actually the instrumental version of “Love is All Right,” to which it was the B-side, it didn’t even include Mr. Nobles, the lead vocalist. (The band’s horn section would later become the nucleus of Philly soul stalwarts MFSB; more on them shortly.) Dexys’ cover was also an instrumental B-side, to “There There My Dear”; it speeds up the original, providing the energy appropriate to their fans’ amphetamine-fueled nights, but sacrificing a good deal of the grit and soul.

The cover most often performed by Dexys, this version of “Respect” was recorded for a BBC Radio One Session, probably in 1980. It starts out similar to the Otis Redding original, which lacked the famous R-E-S-P-E-C-T chorus or the “sock it to me” backing vocals Aretha Franklin added in her iconic cover. About halfway through, it starts to morph into a Franklin cover, with the addition of a trademark (and distracting) Rowland spoken monologue, before finishing big with lots of spelling and socking.

The Bar-Kays were Memphis studio musicians who also put out music under their own name. “Soul Finger,” released in 1967, was their first single, and it was a hit, opening with a snippet from “Mary Had a Little Lamb,” leading into a horn-led funk fest. The original featured the sound of neighborhood kids who had been hanging around outside the studio; they talked and occasionally chanted the song’s title, for which they received free sodas. Not long after “Soul Finger” was released, most of the Bar-Kays died in the plane crash that also cost Otis Redding his life. Dexys’ version, the B-side to the single release of Too-Rye-Ay’s “Plan B,” is faithful to the original, without the kids, but with Rowland occasionally interjecting himself.

A great interpretation of a great Van Morrison song, “Jackie Wilson Said” is, in many ways, the perfect Dexys cover, paying tribute not only to the great soul singer Jackie Wilson, but also to their own Celtic soul forebear, Van Morrison. Morrison actually came to the studio to add background vocals to the track; displaying typical Morrison perversity, he stood before the microphone during numerous takes without ever singing a note. The follow-up single to “Eileen,” it hit #5 on the U.K. singles charts. Rowland has been quoted as saying that Morrison believed that the Dexys version was better than the original – it isn’t, but it may be as good, which is saying a lot.

The B-side to the 12” release of “Jackie Wilson Said,” “TSOP” is a cover of the disco hit by MFSB, which was the theme to the TV show Soul Train. The mostly instrumental original includes vocals by the Three Degrees, singing “Let’s get it on/It’s time to get down.” The Dexys version subtly de-discofies “TSOP” to make it more of a soul song, adding trademark Celtic influences, most notably fiddles, and a few extra lyrics. While hearing the original may evoke major ’70s nostalgia, the cover’s elimination of the disco backbeat makes it a real improvement.

The time has come to trash any and all good will toward Dexys that this post may have generated. This may well be one of the worst covers ever. In 1999, Rowland released his second solo album, My Beauty, consisting entirely of covers and sporting a sleeve that featured Rowland in drag. This version of “Thunder Road” was going to be included – it appeared on review copies that were sent to critics – but it was removed after Springsteen objected to Rowland’s lyric changes (although he somehow let Manfred Mann get away with defiling “Blinded By The Light”). Bruce should have objected to the lousy arrangement and performance, too. Like a train wreck, it is hard to look away, even though you really should. Now, through the magic of the Internet, here it is – rubberneck to your heart’s content.

Like Kevin Rowland, Nate Ruess, the lead singer of fun., has a sort of adenoidal voice and can be prone to excessive emoting. This has worked for his band, as they moved from indie darlings to massive hit makers, and it also makes them naturals to cover “Come On Eileen.” Here’s a video of their excellent and enthusiastic version of the song that has (wrongly) consigned Dexys to one-hit-wonderland, from a performance in 2008, before fun. were filling large venues — in fact, before their debut album was even released and years before the Some Nights juggernaut was unleashed. The guitarist is even wearing a cap that Rowland would have approved of, but the violin leaves a little something to be desired.

Convinced?  If so, check out Dexys at Amazon or iTunes.  Or read a book about them.  And if the midnight runners are keeping you awake, there’s this.