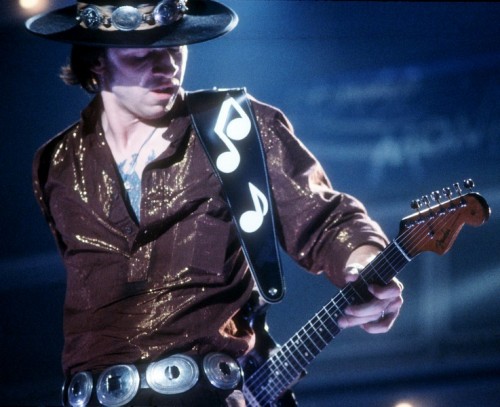 (His strings) were like fucking telephone wires. Just a little bit bigger piece of wood and you’d have a fuckin’ piano. – Robert “Cutter” Brandenburg, Stevie Ray Vaughan’s friend and roadie, on Vaughan’s guitar

He just sort of kicked everyone’s ass and no one seemed to fight back. – Jimmie Vaughan, on his brother outplaying him, Robert Cray, Eric Clapton, and Buddy Guy at his final performance in East Troy, Wisconsin

I’m just asking y’all to take care of yourself so you can be there for the ones that love you and need you the most. And they need you all the time. I know I do. – Stevie Ray Vaughan preaching a little grace to a Denver audience, November 1989

When I was 19, I suckered one of my buddies into teaching me to play guitar. As part of these lessons, he give me a list of songs to download. That’s how I discovered Bad Brains and prog rock, how I learned that a man can stick an empty bucket of extra crispy on his head and still shred.

One week, my friend gave me very specific directions – “Go home and check out Stevie Ray Vaughan’s ‘Pride and Joy,’ and then next week we’ll talk about the blues.” I went home, fired up Audiogalaxy, and discovered a treasure trove of SRV. I spent the next week greedily consuming as much as I could, gorging myself on Texas blues – all hickory smoke, fat droplets of condensation beading on bottles of Shiner Bock and the astringent twang of Texan accents and slinky guitar strings.

I came back the next week buzzing with excitement. “Oh my God! I love Stevie Ray Vaughan! Have you heard his Jimi covers? So good! And ‘Lenny’? It literally sounds like being in love. Literally! What’s he up to these days?”

My heart slammed against my rib cage. “What?”

“He’s dead. He died in a helicopter crash like, ten years ago or something.”

It was true. On August 27, 1990 (the fourth anniversary of his father’s death), following his Wisconsin show, Vaughan hopped into a helicopter headed for Chicago. The aircraft departed in dense fog, and less than a mile from the takeoff site, it crashed into the side of a ski slope. All five on board were killed upon impact.

I glared, and then I basically Hadouken’d my friend. Imagine a four-foot-eleven fireball launching herself at a six-foot-four giant. I sort of bounced off of him, but that did little to quell my rage. “I hate you!” I yelled. “You knew I would fall in love with him and you knew he was dead and you knew that I can never see him live and he can never make more music and you knew it and I hate you!”

It wasn’t my most rational moment, but that’s how I felt. Like I had been robbed. Like something had been taken from me before I even really had a chance to make it mine.

I came to learn that Stevie Ray had packed a lot of living into his thirty-five years. Started playing at seven, turned pro at sixteen. Made a substantial splash on the Austin music scene, developing a style that served up rollicking Texas roadhouse rock with heavy blues influences, filled with twang and licks so greasy you’d need a biscuit to sop them up. Played the Montreux Jazz Festival and Carnegie Hall with his band Double Trouble.

Downed seven grams of cocaine and a fifth of Crown Royal on a daily basis. A near-death experience in Germany led him to check himself into rehab, determined to get clean and start over. He succeeded at both, truly finding his songwriting voice with the release of In Step and staying sober for the rest of his life.

Fate is a cruel goddess, and although she robbed us of the man, even she can’t take away the music. In the short time that Stevie Ray Vaughan wandered this world, he made an indelible mark and left us with a rich and varied anthology of music. Everything from blues standards to note-bending Jimi Hendrix covers to the prettiest jazz-influenced melodies to the shit-kicking soundtracks for getting into bar fights.

His six strings might be down, but he’ll never be forgotten.

Rave on, Stevie Ray Vaughan. And, as it says on your gravestone, thank you… for all the love you passed our way.

Yeah, he’s got a propensity to say spectacularly stupid things about the women he dates, and yeah, he wrote “Your Body is a Wonderland,” but John Mayer has a few saving graces. He’s a pretty talented guitarist; he did this Chappelle’s Show sketch; and he’s a huge Stevie Ray Vaughan fan – so much so that he has “SRV” indelibly inked on his arm. Though truncated, Mayer’s cover of Stevie Ray’s “Lenny” (an ode to his first wife) is a gorgeous tribute. Mayer shows off his chops without getting too brazen and deviating from the source material, thus creating a cleaner kindred spirit that remains just as bluesy and love-struck as the original.

Kenny Chesney is the soundtrack to beer-drinkin’, summer afternoons, and sunburns. That being the case, “Pride and Joy” is right in his wheelhouse. A boisterous boast about a sweet little thang, the song could be about a long, lean, lovely lady, or it could be about the new fishing boat that Chesney just picked up. Either way, Chesney brings all his swagger and twang to this live cover and does Stevie Ray proud.

The Beatles are the most covered band in the history of music, so it makes sense that SRV would have a Beatles cover up his sleeve. Instead of treading the well-worn territory of “Yesterday” or “Hey Jude,” Vaughan chose to cover “Taxman,” the opening track of Revolver, and snarl George Harrison’s lyrics over the brazen yowl of insistent guitars. It works incredibly well, especially when he rasps, “Be thankful I don’t take it all.” He might not take it all, but he certainly leaves it all on this track.

A blues standard credited to Robert Johnson, “Sweet Home Chicago” has been covered by artists as diverse as Fleetwood Mac, the Replacements, and Los Lobos. Hell, even President Obama sang a few bars during a blues celebration at the White House. It was also the last song Stevie Ray Vaughan ever performed in front of an audience. An opus of a jam session, this version of “Sweet Home Chicago” clocks in at nearly a quarter of an hour and features a jubilant Stevie Ray making his guitar howl as if in the throes of ecstasy. C’mon, baby, don’t ya wanna go? Well, yeah – if Stevie Ray’s playing lead, I’ll follow him pretty much anywhere.

Learn more about Stevie Ray Vaughan at his website.

One Response to “In Memoriam: Stevie Ray Vaughan”