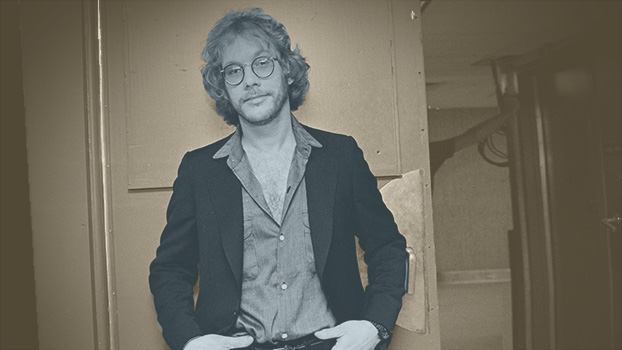 The fact that Hunter S. Thompson was a friend of Warren Zevon’s really shouldn’t surprise anybody: his crazy songs of headless mercenaries and KGB waitresses sound like Fear and Loathing on vinyl. Starting out as a songwriter for groups such as the Turtles in the ’60s (he said that the B-side he wrote for “Happy Together” paid his rent for years), Zevon struggled with his own songwriting identity until releasing his Jackson Browne-produced eponymous album in 1976, and its follow-up, 1978’s Excitable Boy. Although never really recapturing the fire that those two albums kindled for him, he went on to have sporadic success between long bouts of drug and alcohol addiction, and became known for his rambunctious live shows attended by equally rambunctious fans.

One of those fans was David Letterman, whose show Zevon semi-irregularly appeared on when he subbed for band leader Paul Shaffer. His sense of humor was paramount: when Zevon came down with lung cancer in 2002, he told Letterman, “I might have made a tactical error in not going to a physician for 20 years. It’s one of those phobias that didn’t pay off.”

The New York Times described what happened next:

Letterman asked Zevon if his condition had taught him anything about life and death. “How much you’re supposed to enjoy every sandwich,” Zevon answered.

Weeks later, Letterman was still struck by the reply. “Here’s a guy looking right down the barrel of the gun,” he said. “And if a guy wanted to indulge himself in great hyperbole in that circumstance, who wouldn’t forgive him? But that was perfect, the simplicity of that. If this guy is not a poet, who is?”

Warren Zevon eschewed treatment and decided to record one last album, The Wind, during the short time he had left; two weeks after its celebrated release, he was dead. But like they say, it’s not how he died that we remember, but how he lived (and we, unabashed Zevon fans that we are, do remember; see here and here). Let’s pull back the curtain and look at his accomplishments now:

Long Island’s The Boys Club gets us started with a punk-ish version of “Excitable Boy.” Although they drop Zevon’s trademark piano, they make up for it with the same upbeat sound and background vocals that kept the original song (about a psychopath who just can’t be rehabilitated) so gosh-darn upbeat. Like the original, it fades out a bit too quick, but it’s two and a half minutes of glorious pop gruesomeness.

The Drive-By Truckers have a true love-hate relationship with the South, refighting the War Between the States in frontman Patterson Hood’s mind. Their magnum opus Southern Rock Opera shows a love for both Neil Young AND Ronnie Van Zant despite their infamous feud-in-song; Hood often spills his guts about his feelings on the Bible Belt when he talks to the press. So it makes sense they would cover Zevon’s “Play It All Night Long,” which was really just an insulting “Southern Man II.”

Recorded when third guitarist Jason Isbell was still in the band, DBT immediately dispenses the grunge, throttling up to a trio of guitars toot sweet. Hood’s raspy caterwaul won’t seduce the casual listener, but it will offer a blood transfusion to the dirty-hearted. As Hood dirty dances with yet another Skynyrd reference, the music just howls up through the night, bringing down tree branches and causing havoc with the power lines.

Speaking of howling, The Black Velvet Band’s lead singer Kieran Kennedy’s “A-WOO!” is more Teen Wolf than Wolf Man on Warren Zevon’s most popular song, but the arrangement adds a spirited horn section that more than compensates. In the vein of Zevon himself, who was known to change the lyrics to his songs depending on where he was playing, the band Dublinizes “Werewolves,” inserting the Irish pub The Blue Light, changing the chorus, and throwing in a reference to poet Oscar Wilde’s flamboyant lifestyle.

Browne has played this song for the last couple of years with former Nickel Creek fiddler Sara Watkins, who will tour with him again this year. Together they capture Zevon’s plea for a simple good, and we won’t muddy it up with words. Just listen.

“Warm Rain” was actually never released on an album; Zevon recorded the demo in the ’60s, early in his songwriting career. Simone Stevens covered the song with Zevon’s son Jordan for the tribute album Hurry Home Early: The Songs of Warren Zevon a couple of years after his death. The piano plunks down the rain as Stevens voice and the strings swell up to carry the melody away.

Jason Molina was the biggest fan of Warren Zevon. Through his various bands (Songs: Ohia & Magnolia Electric) and his solo work, he covered his way through Zevon’s catalog. Perhaps Molina followed his idol too closely: he died last month at the young age of 40, yet another rocker succumbing to the dangers of the bottle. His covers were always detailed recreations of his hero’s work. We’ll give him “Lawyers, Guns and Money,” perhaps the most popular bar band song of all time.

Part of the enjoyment in listening to Warren Zevon is that he never washed his songs before playing them: the lycanthrope and the psychopath are presented as is. But if you were to hold a Zevon tune under the shower long enough, chop off its hair and teach it some manners, it might sound like Madeleine Peyroux’s beautiful version of “Desperados Under the Eaves.”

A lavish, almost cinematic production builds up to Peyroux’s startling Billie Holiday-like voice, teaching Zevon’s song a bit of higher culture (and its hair is perfect). Cleaned up and civilized, “Desperados” is the Eliza Doolittle of Zevon covers, a so-phi-sti-ca-ted lady who still has the hairiest of legs.

Here is Warren Zevon’s official website. Here is a good unofficial one.

One Response to “In the Spotlight: Warren Zevon”