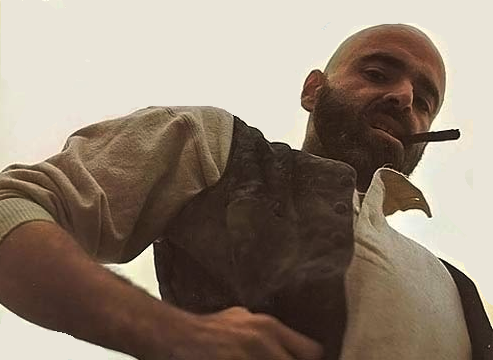 Where I come from, Shel Silverstein was a demigod. —David Mamet

Shel Silverstein was the unofficial poet laureate of everyone’s childhood. His books — The Giving Tree, A Light In the Attic, Where the Sidewalk Ends — were instrumental in showing that kids could handle some of the adult themes in life without becoming degenerates, or maybe even that it was okay to be a degenerate. That’s not to say the bluenoses didn’t try to stop him: A Light in the Attic placed midway in the top 100 books banned from the 1990’s. Some bristled at Silverstein’s adult side, even though he saved his more salacious material for songs and adult poems that weren’t meant for children. That material is definitely a product of the sixties and seventies, detailing everything from every sexual fetish imaginable (“Freakin’ At the Freakers Ball”) to every drug available (“The Perfect High”). Some of it we’ll feature today, the 14th anniversary of his death (or at least of the day they found his body).  Read on.

Silverstein started his cartoonist career with the military newspaper Stars and Stripes after he was drafted into the army. He moved on to Playboy early in the magazine’s existence, and both his children’s poetry books and his songwriting career soon followed. He was a bit of a hedonist and a frequent guest of Hugh Hefner’s at the Playboy Mansion; he also was instrumental in getting the Grateful Dead to play there in 1969. According to legend (and the Dead’s manager at the time), their soundman, disgruntled with the sound that a CBS film crew had put into place, spiked the mansions’s coffee with LSD. Silverstein was responsible for making sure Hef didn’t get dosed. Some of the chaos that followed made it onto the show Playboy After Dark.

Soon after, Silverstein pegged a New Jersey band to perform some songs he had written for the Dustin Hoffman movie Who Is Harry Kellerman and Why Is He Saying Those Terrible Things About Me?; that band was Dr. Hook and the Medicine Show, and although the movie didn’t do so hot, they were on their way. Silverstein wrote many of the songs on their first album, and their complete second one. He continued to write for them throughout the ’70s; their ability to combine fun, sleaze, and a soulful heart made them the perfect vehicle for some of his most popular songs.

Silverstein’s music was covered by many other artists, mostly in the country genre. Kris Kristofferson, Bobby Bare, Loretta Lynn, Johnny Cash, and Waylon Jennings all recorded Shel songs. He was not one for self-promotion and gave few interviews, saying, “If you want to find out what a writer or a cartoonist really feels, look at his work.” So let’s do that now.

My Morning Jacket recorded this cover of “Lullabies, Legends and Lies” for the Bobby Bare/Bobby Bare Jr.-produced Twistable Turnable Man, then proceeded to almost never play it again live. They did play it during an episode of Storytellers for VH1, who promptly excluded it from the television broadcast. Shel Silverstein wrote a song about a unicorn, but we didn’t think it would be harder to find this song (a)live. Enjoy.

Silverstein said “Sylvia’s Mother” was inspired by the true story of his attempt to get past the gatekeeper-mom of a woman he was trying to pursue over the phone. Department of You Can’t Make This Up: Sylvia (her name in real life) was moving to Mexico to marry a bullfighter/painter, and Silverstein was determined to stop her —alas, to no avail. In Melissa Etheridge’s cover, accompanied by her acoustic guitar and an evening cricket chorus, Etheridge’s sexual preference adds another facet to the tale, and a different reason why Sylvia’s mother might be obstructing her desire. Etheridge’s voice soars at the end, her anguish and desperation peaking as she finally runs out of change.

Head of the Herd — 25 Minutes To Go (Shel Silverstein cover)

“25 Minutes To Go” is the adult version of Silverstein’s poem “Boa Constrictor.” Written about the last half an hour of a death row inmate’s life, Silverstein counts down every minute until the bloody end. The Head of the Herd’s Neu Mannis growls out a bluesy vocal, then uses his last breath to make his harmonica wail.

The Union Jack’s Rhy Mallinger is the great nephew of Dr. Hook’s Ray Sawyer, so it’s only fitting they recorded one of their greatest hits. Although played with just two acoustic guitars, all the decadence of the original “Cover of the Rolling Stone” comes roaring through.

Nellie McKay sang this version of “One’s On the Way” at a Planned Parenthood rally in New York City (along with her darkly satirical “Mother of Pearl”), so when she sings about the “women marching for women’s lib,” the cheer that erupts almost steals the show. Silverstein’s song, written for Loretta Lynn, walks the line between envy, apathy, ignorance, and blessing, but like many great songs it can be interpreted by the listener in many ways. We’ll let you decide for yourself what it “means.”

Backed by The Decemberists side project Black Prairie, Sarah Jarosz gives “QOTSD” the roy5al treatment, elevating a barfly to regal status. Another cut off of Turnable, Twistable Man, the song was also covered by the great Emmylou Harris. Copying Harris’ twist on the last verse, Jarosz switches to the first person, showing no shame in sitting on a barstool throne.

Shel Silverstein’s recordings, both musical and spoken word, are available on iTunes and Amazon.

3 Responses to “In Memoriam: Shel Silverstein”