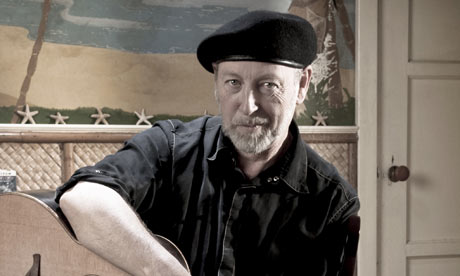 Electric, Richard Thompson’s newest album, followed the pattern of all his releases – first-rate material, critical hosannas, sales to his devoted core following, and no long-deserved breakthrough to the masses. Having been through this for four and a half decades now, he’d be forgiven for growing complacent with this level of acceptance; instead, he continues to take chances, and his playing and songwriting continue to stand astride a very tall mountain with very little room for others to join him at the peak.

One thing that Thompson has in spades is the respect of his peers, who sing his praises in interviews as venerationally as they sing his songs. As he turns 64 today, we offer these five performances, less covers than celebrations of one man’s work.

Thompson got started with songwriting in his teens, believing that if Fairport Convention was going to have any significance, they were going to have to branch away from their cover-band beginnings. “Meet on the Ledge,” one of his earliest efforts, went on to become a Fairport staple, a title track to an anthology, the name of a book on the band, and a favorite show-closer. This cover comes from an undeservedly overlooked English folk band called Prelude; this sounds like an outtake from CSN’s Daylight Again, only better than anything on that album.

“I wish I was a fool for you again” is a contender for the greatest single line about lost love in songwriting history. Richard Thompson wrote it and sang it with his wife Linda on 1975’s Pour Down Like Silver. A third of a century later, another husband and wife team, Dan Littleton and Elizabeth Mitchell of Ida, covered “For Shame of Doing Wrong” for their Lovers Prayers album, their singing and playing blending into gentle, bittersweet waves.

When Spinner.com asked Thompson to name his favorite cover versions of his songs, his choice for number one was Bonnie Raitt’s “Dimming of the Day.” “She’s just a fabulous singer,” he explained. “She makes everything sound so effortless that it’s just glorious, [and] she has great soul as well.” (Click here to see his other choices.) With a rave like that, it would seem churlish not to include it here; of course, it helps that his review is spot-on.

“Tear-Stained Letter” opened Thompson’s first post-Linda record, Hand of Kindness. Some read it as an acidic kiss-off to his ex, but the merry melody and the narrator’s own self-degradation give the lie to that theory. The song found a wider audience than Thompson’s work usually does when Jo-El Sonnier’s Cajun-flavored cover went top ten on the country charts, proving that you didn’t have to understand a line like “my head was beating like a song by the Clash” in order to get it.

Twenty years after writing “Meet on the Ledge,” Thompson proved his material remained first-rate with the 1988 release Amnesia. It included another paean to unrequited love, “Waltzing’s for Dreamers,” one that would be covered by Edwina Hayes, a full-fledged Thompson acolyte blessed with what Nanci Griffith called “the sweetest voice in England.” Soft and clear as rainwater, Hayes’s voice purifies the sadness of the song, seeping into the heart rather than tugging at it.

Live at Celtic Connections, a 2011 Richard Thompson concert, is available at Amazon on DVD and Blu-Ray. Needless to say, it’s getting five star reviews left and right.

One Response to “They Say It’s Your Birthday: Richard Thompson”