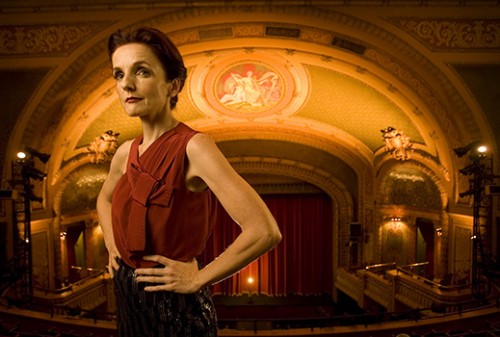 We’re going to take it down a notch today with an artist known more for her songs than her performances. While some would say this is a dream come true for songwriters who also perform, for Patty Griffin it’s been both a curse and a blessing. Griffin’s “Let Him Fly” and “Top of the World” are more known by their Dixie Chicks covers; “Up to the Mountain (MLK Song)” is known for being American Idol-ized – in fact, four performers on American Idol have sung “Up to the Mountain,” turning it almost into a karaoke contest. Miranda Lambert, Jessica Simpson, and a cast of thousands just can’t stop singing Patty Griffin songs, and their covers have become wildly popular. But Griffin herself is much less known, and even though she’s won Grammys, the public at large often thinks that her songs belong to someone else.

The problem with a blog like ours looking for covers of songs such as these is that once they get popular, a zillion people start uploading their bedroom cover videos to YouTube, making it next to impossible to find the needle in one of the ever-increasing number of haystacks. That’s not to say all of those songs are bad; in fact, we have more “unknowns” this week than “knowns,” and we think you’ll like them. But after spending hours searching the internets, let’s just say that while almost everyone who plays music starts out playing so bad it’s criminal, maybe they shouldn’t feel the need to upload the evidence to YouTube and prove it. Keep the glockenspiel in the closet, buddy.

But back to Patty Griffin. She started out in a more rock and roll vein and has moved towards a folk one (her last rock album,  the unreleased Silver Bell, leaked onto the internet and has a cult following; sadly, that rock and roll door may have closed), still has huge critical acclaim, an adoring fanbase, and the camaraderie of many artists who want to collaborate with her. Count Robert Plant as a collaborator and adorer both; he and Griffin have appeared on each other’s albums and are now romantically linked. Let’s take a look at some other artists who have a whole lotta love for her…

MP3: Ron Kujawa — Heavenly Day (Patty Griffin Cover)
The first thing you’ll notice about Ron Kujawa’s voice — that is, if you know the reference — is the great resemblance it bears to Roddy Frame’s of Aztec Camera. Without an album to his name, Kujawa effortlessly glides through Griffin’s “Heavenly Day,” making all the big kids jealous.

MP3: Rachel VanSlyke — Making Pies (Patty Griffin Cover)
Rachel VanSlyke’s great cover of Griffin’s “Making Pies” is overshadowed by something that annoys many of us music fans. In fact, this might be a good time for a public service announcement, brought to you by Jeff Tweedy of Wilco:

Like many performances, VanSlyke wins over some of the talkers after a while with her ability to get Griffin’s tone exactly right. It’s just unfortunate that some of the crowd never shut up and don’t know a great thing when they hear it.

MP3: Solomon Burke and Patty Griffin — Up To the Mountain (Song for MLK) (Patty Griffin Cover)
Solomon Burke recorded the song “Up To The Mountain (Song for MLK)” when he was 66, a few years before his death. Burke’s music career lasted over 50 years, including through the civil rights movement, and he showed great appreciation for Griffin’s tribute to Martin Luther King (who Burke actually knew). Although Burke ended up recording the song for his album Nashville, this live version shows the preacher improvising the lyrics, finishing the song in front of the pews.

In a meta moment, Patty Griffin sings backup here, recreating the harmonies she lent to his studio version. Once again she takes a back seat to one of her own songs, but she does so gladly; she has said she prefers Burke’s version over her own.

MP3: Carmen Lucia — Up to the Mountain (Song For MLK) (Patty Griffin Cover)
Edmonton’s Carmen Lucia is another artist under the radar this week. The pianist takes on “Up to the Mountain” as well and does a great job of pulling out the sorrow of the song without Idol-izing it. Her version sits neatly between Burke’s low-key hymn and Kelly Clarkson’s pull-out-the-stops aria.

MP3: Joan Osborne — What You Are (Patty Griffin Cover)
Joan Osborne, of course, is no stranger to covers, doing everything from blues to soul to funk and back again. When she recorded Pretty Little Strangers in 2006, she brought in legendary country producer Steve Buckingham on board to turn the knobs. It’s a testament to his talent that “What You Are” doesn’t let the song get overly sweet; Buckingham keeps an eye on the candy thermometer and never lets the sugar burn. Before things get too sappy, Osborne steps away from the microphone and lets the slide guitar play the song out.

MP3: The Reliques — When It Don’t Come Easy (Patty Griffin Cover)
The Reliques are an Austin-based duo who have three EPs under their belt at present. They come at “When It Don’t Come Easy” from a more personal angle.  Every time Sarah Monteen’s voice breaks, vulnerability and emotion pour out, a sincere plea for solace. Sarah Dossey’s mandolin just touches down on the song here and there, her harmonies adding to the emotional hold. The Reliques have figured out that less is more, and theirs is a stronger cover because of it.

So what do you think? Do covers have to be Idolized to bring out the best in a performer?

One Response to “In the Spotlight: Patty Griffin”