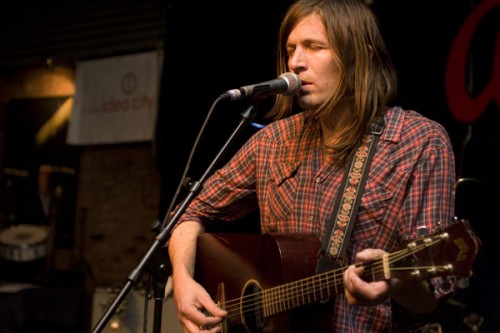 Evan Dando gets a lot of flack for being the poster boy of college-friendly rock in the early- to mid-’90s. He was the subject of focus to Kathleen Hanna (Bikini Kill/Le Tigre/wife of Ad Rock from the Beastie Boys), who wrote a particularly intense zine piece about him, and he was also the target of Steve Albini and Nirvana, who pranked him pretty good. However, his choice of covers as a solo artist and as lead Lemonhead reveal that behind his good looks, he also has a deep appreciation of crafty songwriting, as well as a good-natured and self-deprecating sense of humor.

One cannot discuss the Lemonheads or Dando without mentioning “Mrs. Robinson,” the smash hit that propelled them into the limelight. One curious thing about this song is its absence from the original pressing of It’s A Shame About Ray; it was later added due to its massive popularity and also to coincide with the 25th anniversary of The Graduate. While Dando himself grew tired of this song soon after its rise in popularity, it serves as an important reference point in the history of the band.

When Evan Dando covered Big Star’s classic song “The Ballad of El Goodo” as part of the Empire Records soundtrack, he was probably speaking about the vices he personally encountered during his experiences with fame. Compared to Alex Chilton’s much sweeter-sounding vocals, Dando’s deeper delivery seems much more appropriate for the song as he sings about the disillusionment and disappointments in the world.

Oasis were a fellow mid-90’s megaband and good friends with the Lemonheads. Although their musical styles were slightly different, one thing they did share was how they both differed from the predominantly grunge sound of the era. Dando’s playful cover of the Oasis hit “Live Forever” omits the self-fellating guitar solo and instead substitutes a whimsical whistling break.

“Different Drum” was originally written by Michael “The Monkee With The Hat” Nesmith and was first recorded by The Greenbriar Boys. However, Dando and The Lemonheads coyly stick with the lyrics from the most popular version of this song, by Linda Ronstadt and the Stone Poneys, choosing to sing it like a traditional torch song: “Oh, don’t get me wrong, it’s not that I knock it / It’s just that I am not in the market / For a boy who wants to love only me.”

Smudge was am Australian rock band, and their frontman Tim Morgan was a frequent songwriting collaborator with Dando from 1992-1996. The Lemonheads chose to cover “The Outdoor Type,” one of the more dryly humorous songs by Smudge, which pokes fun at the lengths to which some will go to impress a girl.

Bonus Video: Evan Dando – I Wish I Was Him (Noise Addict cover)

Noise Addict was another Australian band, fronted by a barely-in-his-teens Ben Lee. He wrote an ode to Evan Dando, who was probably the singer-songwriter role model for many aspiring teenagers at the time. In a bizarre turn of events, Dando would later go on to perform the song live, perhaps as a wink and a nod back to Ben Lee, to Smudge (who get a shout-out in the original lyrics), and even to Kathleen Hanna, who covered it herself.

You can find more albums and songs by The Lemonheads on iTunes or Amazon.

4 Responses to “In the Spotlight: Evan Dando”