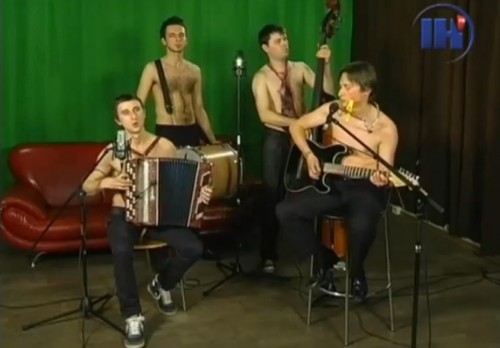 Over the weekend an email came in that totally changed the way we think about Ukrainian polka covers of pop hits. As in, we’d never thought about them at all before, and now we can’t stop. The eye-opening comes courtesy of Los Colorados, whose oom-pah accordion and single marching-band bass drum makes pop songs sound like something you might hear at your Polish Nana’s 80th birthday party.

Their only official music video is for their cover of “I Like to Move It Move It,” which was apparently chosen by the biggest public TV station in Germany as the official song for the European football championship last year. Shout out to the drummer who tries to flip his stick and fails, but leaves it in the video anyway.

Even more charming are two live covers of Katy Perry’s “Hot & Cold” and Rammstein’s “Du Hast,” recorded in what looks like an ‘80s public access studio. They are inexplicably shirtless for the Rammstein, with nary a wink or smirk to cut through what we’re assuming is very dry Ukrainian humor.

Sample their entire debut album (which includes covers of Ke$ha, MC Hammer, and more) at Soundcloud.