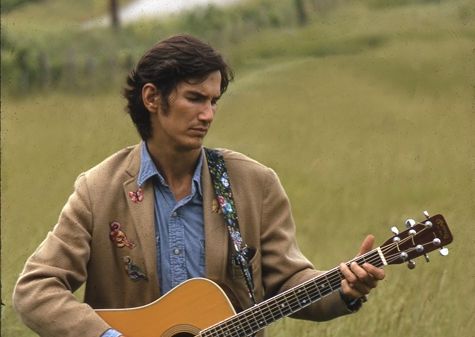 Here at Cover Me, we have several categories where we salute artists who are still doing good work in the cover song field. What we haven’t had is a category to salute those who no longer walk among the living, but whose songs have built a legacy that keeps their voices as alive as yours and mine. That changes today with the grand opening of our In Memoriam category, where we remember those who have moved on into the great unknown and left an abundance of their gifts behind. Our first subject: Townes Van Zandt, born 69 years ago today.

Van Zandt’s life was a turbulent one, self-destructive to the nth degree both personally and professionally. The pain he generated appeared throughout his musical catalog, doing battle with the heart and not always losing. That conflict drove Van Zandt’s songs in such a way that allowed them to drive their way into the listeners’ very beings – even as those same listeners kept a wary distance of Van Zandt himself. Check out how powerful these songs are, and take a moment to think of what Van Zandt went through to get them that way.

Dreampoppers Azure Ray’s cover of “For the Sake of the Song” is a textbook example of the difference between pretty and gorgeous. Where Van Zandt’s melody was either obscured by busy production or pared back to basics, Orenda Fink and Maria Taylor enrich the music with full yet clear instrumentation, then float their heavenly vocals atop. Result: less a cover than a transfiguration.

Van Zandt called “Waiting Around to Die” the first serious song he ever wrote; it’s certainly one of his bleaker ones, with the narrator coming from an abusive home, robbing and being robbed, and falling into the arms of Morpheus. It’s timeless in its way, too; the Be Good Tanyas’ cover, recorded thirty-five years after Van Zandt wrote it, sounds like it could have been first performed a hundred years earlier.

Isobel Campbell started out with Belle & Sebastian; Mark Lanegan co-founded Screaming Trees. Not a couple you’d imagine pairing up, let alone making beautiful music together, but they’re three albums into a very fruitful partnership. “No Place to Fall,” from 2010’s Hawk, is a good example of what happens when her light meets his shadows.

As a driving force in Uncle Tupelo and Son Volt, Jay Farrar can lay claim to being one of the key members of the Americana music genre; Van Zandt’s music predated the radio format by a good two decades, but would have fit like a well-worn boot. Farrar may well be incapable of not doing justice to “White Freightliner Blues,” but not only does he pull it off, live on stage, he gives it a tormented edge that scrapes down to a level just above real pain.

Mumford & Sons – If I Needed You (Townes Van Zandt cover)

“Pancho and Lefty” may be Van Zandt’s signature song, but “If I Needed You” has an equally strong hold on interpreters. This version, performed by Mumford and Sons, raises the tension and the volume as the song goes along, and the final verse brings release in a way the original didn’t, lifting the spirits as well as the heart.

Townes Van Zandt’s family maintains his web page. His work is available on iTunes and Amazon; Be Here to Love Me, a documentary on his life, is essential viewing.

One Response to “In Memoriam: Townes Van Zandt”