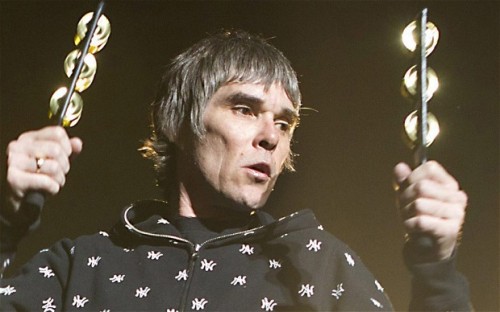 2013 is a good time to be Ian Brown. He and his Stone Roses bandmates are currently are doing shows in Dubai, Indonesia, and the land Down Under. They’re headlining the Coachella festival this spring, with a documentary and a possible studio album to follow. The Internet is abuzz with rumors that the Flaming Lips are planning to cover the Roses’ immortal debut album in its entirety. All in all, there can’t be many better ways to celebrate turning fifty.

That’s right – Ian Brown is half a century along. This might make some of his fans feel old, but if Ian hasn’t lost his charismatic swagger, why should anyone else? No, this is a rare occasion and should be treated as such. So let’s get the revelry going with five Stone Roses covers that’ll make you want to paint the town red, Jackson Pollock style.

Monsters Are Waiting – I Wanna Be Adored (The Stone Roses cover)

The opening track of The Stone Roses, “I Wanna Be Adored,” takes on different connotations when sung by Annalee Fery, the vocalist for Monsters Are Waiting. Where Brown delivered his manifesto to the masses, Fery’s hushed yet sweet vocal makes the song sound like a diary entry. The music behind her, as with Brown, provides the lyrics with true conviction.

Liz Enthusiasm, from the indie synthpop band Freezepop, teamed up with her friend Gordon Merrick to create the Manchester On My Mind EP, saluting three bands from the town in England with so much to answer for. “Elephant Stone,” their Roses cover, is gentler on the stomach than the original, with the male/female duetting adding a level of sweetness and intimacy that Brown & Company were too busy rushing past.

Pete Doherty of the Libertines led a life that seemed designed to turn his musical career into a shambles – and had a talent like a phoenix, continually rising form the ashes. His acoustic cover of “Sally Cinnamon” adds a reference to crack and stumbles toward the end, but it holds a beauty that’s as riveting as it is undeniable.

I Am The World Trade Center’s laptop-pop owed much to the Stone Roses; Tight Connection, their second album, made the influence more overt by including a cover of “Shoot You Down.” The approach may be more machine now than man, but there’s still good in this fearless and inventive reinterpretation.

Wheedle’s Groove was a 2004 compilation of Seattle funk from the ’60s and ’70s; it generated enough interest that several of its musicians reunited for a 2009 follow-up. Listen to “Fool’s Gold” and you’ll be amazed that it’s being played by men who’ve reached their three score and change; the groove they lay down flat-out cooks, and Calvin Law turns Brown’s swagger into his own special strut.

The Stone Roses’ classic debut is available on iTunes and Amazon; there’s more to be had on websites official and unofficial.