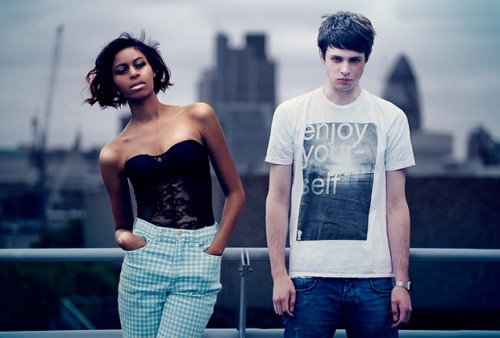 Frank Ocean‘s “Thinking Bout You” has a way of getting to you. Halfway through the track, as the cycle of verse-chorus-verse repeats yet again, the spacey song becomes something more than the sum of its parts. Ocean’s falsetto “I’ve been thinking bout forever” is brimming with emotional depth, giving the song a heaviness that rarely finds its way to today’s pop charts.

The cover by British electronic duo AlunaGeorge strips away all the hidden depths and meanings and turns the song into a flirty dance-pop single. That’s not supposed to sound like a dig: when Aluna Francis coos “or do you not think so far ahead” it sounds less like an accusation than a suggestion. Don’t worry, just dance.

George Reid’s popping backing track starts as a minimalist throbbing, fitting the shut-up-and-dance theme. By the end, though, the crashing drums he injects wouldn’t sound out of place in a hard rock song. It’s as if they’ve moved beyond “just dance” to a place of even deeper hedonism as everything just kind of breaks down. The only complaint could be that the song feels short at only three minutes: the dance floor could keep bouncing to this one for much longer. Forget depth: let’s dance!